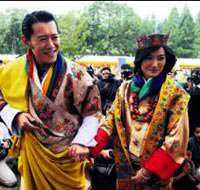 Bhutan's "Dragon King" married a young commoner in an ancient Himalayan monastic fortress on Thursday, sipping a chalice of ambrosia symbolizing eternal life in a Buddhist wedding that has transfixed a reclusive kingdom slowly embracing globalization.

King Jigme Khesar Namgyel Wangchuck wore a crown adorned with a raven's head during the sumptuous ceremony in this 17th-century fortress, as 21-year-old student Jetsun Pema, daughter of an airline pilot, received a crown embroidered with silk.

In a nation of 700,000 people where television was only introduced in 1999, the ceremony was broadcast live. Thousands of people, dressed in traditional colored robes, stood outside. Some monks chanted, others hit drums, as white incense drifted through the morning mist.

Oxford-educated Wangchuck, 31, is revered as this insular nation slowly embraces democracy after his father abdicated in 2006 to introduce parliamentary elections. The monarchy is seen as helping stabilize a fragile democracy wedged between India and China in a conflict-ridden region.

HORNS IN THE MIST

"I am happy. I have been waiting quite some time," the king told reporters after the ceremony. "She is a wonderful human being, intelligent. Her and I share one big thing in common - love and passion for art."

As the mist slowly lifted, Buddhist horns sounded across the Punakha valley as the bride arrived in a procession of singers, relatives and Buddhist monks across an ancient footbridge, all led by a white horse. Baby elephants guarded one of the fortress's entrances.

Nomadic farmers dressed in ceremonial dress walked down from the mountain hills to the fortress, nestled between two rivers.

The king and his father entered a sacred chamber holding the embalmed body of the 17th-century remains of Bhutan's founder, where they received holy Buddhist scarves and a chalice of blessed curd that represents eternal life.

The king's father, accompanied by his four wives, handed the blessed colored scarves to a nervous-looking bride.

"I am a very happy man today," said Kesang Chopel, 41, a Buddhist saffron-robed monk who watched the couple's arrival in Bhutan's former ancient capital. "There is the king, and there are so many masters here, lamas. There is a special feeling."

Posters of the couple adorn almost every building, lamppost and roundabout in the capital, Thimphu, three hours drive away. School children have published poems in the queen's honor, calling her "the moon, a beautiful heroine and the lotus flower."

Monks have held dawn prayer sessions in remote mountain valleys and Bhutan's airline has had to add extra flights to deal with the demand of visitors from abroad.

Bhutan, known as the "Land of the Thunder Dragon" has been happy to promote a Shangri-la image with its snow-capped peaks and largely untouched forests. People must still wear the traditional knee-length robes in public.

Bhutan is known for its "Gross National Happiness" index, that measures personal well-being and the environment rather than focusing on economic growth.

It has been reluctant to open up to the rest of the world. Tourism was only allowed in the 1970s, and when the first car arrived in the 1950s many people thought it was a fire-eating dragon. The capital's attempts to have traffic lights were thwarted by residents complaining they were unsightly.

The 31-year-old monarch is known as the "people's king" for his relaxed manner with his subjects, and - sporting sideburns and swept-back hair - he is a pin-up for many teenage girls as far away as Thailand.

But Bhutan's fifth king, affectionately known as K5, also provides the checks and balances on an unsure democracy where political parties did not exist four years ago.

"The royal wedding has ensured the continuity of the monarchy," said Tshering Tobgay, Bhutan's opposition leader. "And monarchy has helped strengthen our democracy."

A successful monarchy may be key to bringing stability to a kingdom that sits amid a region racked by civil conflict and war. Neighboring Nepal's monarch was recently abolished, while India absorbed the Himalayan kingdom of Sikkim and China, Tibet.

"I will follow in my father's footstep," the king said when asked which direction the monarchy would now take. "My father set the bar very high. Was a wonderful leader. We will try to live up to expectations."

The new king, a keen basketball player and archer, has jettisoned that reclusive and elitist image. He lives in a cottage in Thimphu, and often invites his subjects for tea.

He has spent months touring Bhutan's remote villages - often walking among villagers holding his bride-to-be by the hand.

But while an older generation will bow and refuse to look their king in the eye, a younger generation is happy to converse with their monarch.

After his wedding, the king walked around thousands of many villagers who waited outside the fortress, patting children on the head and shaking hands in gestures unheard from previous monarchs.