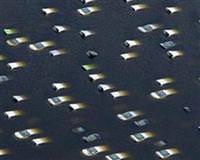 At least 300 Japanese companies have been affected by flooding in Thailand and it could be months before all are fully up and running again, the local head of the Japan External Trade Organisation (JETRO) said on Monday.

Floods have forced a series of huge industrial estates to close, the latest being the Nava Nakorn Industrial Zone in Pathum Thani province north of Bangkok, which has more than 270 plants employing 270,000 workers.

That is seriously hampering the work of Japanese firms that have made Thailand their manufacturing and export base for Southeast Asia, Setsuo Iuchi, the president of JETRO Thailand, told Reuters.

"More than 300 Japanese companies have suffered from the floods directly on five industrial estates," Iuchi said.

"Automobile and electronic manufacturers are more vulnerable because they have supply chains and they need parts. For instance, an automobile needs more than 20,000-30,000 parts -- all of them to make just one car," Iuchi said.

Most of the car companies are located in Thailand's eastern seaboard, away from the flooded areas, but some have had to halt operations because their supply chain has been cut off.

Toyota, for example, said on Friday it would extend the suspension of production at its three assembly plants in Thailand until Oct. 22.

"Some companies have already started more production in other countries. They have some facilities outside so they can increase production there to supply parts to assembly factories in the country," Iuchi said.

"Investors are struggling with the current situation but they are not thinking about relocating to somewhere else yet," he said.

According to some reports on Monday, flood water was receding in the badly hit central province of Ayutthaya, where many of the affected estates are located.

Iuchi appealed for more information from the authorities.

"At the same time, we need more help to pump out the water from industrial sites," he said.

The resumption of production would depend on the end of the flooding, and it could take more than a month for factories to dry out after being flooded, he said.

Industry officials and analysts say most of the auto giants in Thailand rely on "just-in-time" delivery -- the practice of having parts delivered right when they're needed instead of carrying large, costly inventories at assembly plants.

Honda Motor Co has suspended production in Thailand until Oct. 21 at least and says it is difficult to predict when production will resume. Thailand accounts for 4.7 percent of its global output.

Surapong Paisitpattanapong, a spokesman for the Federation of Thai Industries' (FTI) automotive group, said it expected vehicle production this year to miss its forecast of 1.8 million units after car makers and auto parts manufacturers were affected by flooding.

"At this point, I don't think we will reach the target," Surapong said. "Production should still be higher than last year," he added. Last year output reached 1.65 million units.

According to FTI data, vehicle production in the first eight months of this year rose 5.2 percent to 1.1 million units.

Thailand is Southeast Asia's largest car producer and accounts for about 52 percent of the ASEAN market, Surapong said.

"Most of the car makers here primarily use parts that are made in Thailand. Pickup truck production uses more than 90 percent of Thai-built parts and it's about 60 percent in passenger cars, so you can imagine, if they need to order parts from places like Indonesia, Malaysia to substitute for the lost parts," he said.

Global supply chains have only recently recovered from the Japanese earthquake in March. Japanese firms had relied on plants in other countries to make up for lost production.