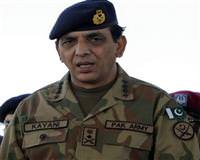 Army chief General Ashfaq Kayani's comments could deepen tensions in the U.S.-Pakistan relationship, an alliance critical to efforts to stabilize Afghanistan before the end of 2014 when NATO combat troops are due home.

Kayani said Pakistan alone would decide if and when to launch a full-scale offensive in North Waziristan, which Western intelligence agencies say is a sanctuary for militants who cross the border to attack U.S.-led NATO forces in Afghanistan.

He also said the United States would have to think "10 times" before taking any unilateral action there. Pakistan is not like Iraq or Afghanistan, the parliamentarian quoted Kayani as saying, suggesting that any North Waziristan operation would be very risky.

The MP spoke on condition of anonymity.

"The problem lies in Afghanistan, not Pakistan," the parliamentarian quoted Kayani as telling the committee in a national security briefing at army headquarters.

The United States, the source of billions of dollars in aid, has urged Pakistan over the years to go after militant groups in North Waziristan, a rugged mountainous region where militants have forged ties with powerful tribes.

"The purpose of this briefing was to mobilize support domestically and to signal to the U.S. that this is the line we are not going to cross at this stage," political analyst Hasan Askari Rizvi said.

"They have signaled what can and what cannot be done."

The pressure on Pakistan has become acute since U.S. special forces killed Osama bin Laden in May in a Pakistani garrison town where he had apparently been living for years.

The unilateral raid infuriated Pakistan's powerful military, which described it as a violation of sovereignty. In Washington, some angry officials wondered if elements of Pakistani intelligence had sheltered bin Laden.

Pakistan said it had no idea he was living in the town of Abbottabad, about a two-hour drive from the capital, Islamabad.

Although ties have been severely damaged over the issue of militancy, few expect a complete rupture.

"If someone convinced me that all problems will be solved by taking action in North Waziristan, I'd do it tomorrow," the parliamentarian quoted Kayani as saying.

"If we need to take action, we will do it on our schedule and according to our capacity."

Admiral Mike Mullen said before retiring as chairman of the U.S. Joint Chiefs of Staff last month that the militant Haqqani group that attacked U.S. targets in Afghanistan was a "veritable arm" of Pakistan's spy agency, the Directorate of Inter-Services Intelligence.

The remarks infuriated Pakistani leaders, who denied links to the group and said Pakistan had sacrificed more than any other country that joined the U.S. "war on terror" after the September 11, 2001 attacks on the United States.

"All intelligence agencies have contacts. Don't the CIA and (the British spy agency) MI6 have such contacts? It is through these contacts that we get information," the parliamentarian quoted Kayani as saying.

"The nice guys don't give you information. It is contacts like this that yield intelligence. It is about whether you use this information positively or negatively."

Analysts say Pakistan maintains ties with the al Qaeda-linked Haqqanis because it sees the group as a lever in Afghanistan, where rival India is vying for influence.

The Pakistani Taliban, who have ties to al Qaeda and Afghan Taliban factions, are blamed for many of the suicide bombings across unstable, nuclear-armed Pakistan.

On Tuesday, Pakistan's interior minister said the government would only hold peace talks with insurgents if they laid down their weapons first. Both sides earlier signaled a willingness to consider negotiations.

Past peace deals with the Taliban, which the United States has put on its list of foreign terrorist organizations, failed to improve security and instead enabled it to build up strength and impose its harsh version of Islam in areas ceded to it.