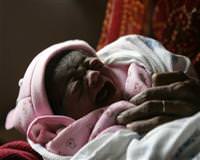 Wrapped in a white blanket, Nargis Yadav lies in the arms of her mother in a small rural clinic in north India -- one of half a million babies born around the world on Monday that will push the global population to the milestone of seven billion.

The U.N.-declared landmark underscores the challenges faced by many countries in providing for the growing numbers of people on an already over stretched and crowded planet.

Nargis was born in the populous state of Uttar Pradesh, one of the poorest regions in India, a country that could soon overtake China as the world's most populated nation.

Her parents, poor villagers who earn just over $100 a month, say they want her to go to school and be successful in life, but aid workers say this will be an uphill struggle, not only for her but others like her in the developing world.

"The child will face a lot of challenges," said Sona Sharma, director for advocacy and communications at the Population Foundation of India.

"Getting proper nutritional food, clean drinking water and even basics such as medical care such as immunizations to help her survive the first few years will be challenging."

With the world's population more than doubling over the last half century, basics like food and water are under more strain than ever, say experts, and providing for an additional 2-3 billion people in the next 50 years is a serious worry.

Water usage is set to increase by 50 percent between 2007 and 2025 in developing nations, while food security remains a challenge with 925 million people going hungry.

To feed the two billion more mouths predicted by 2050, food production will have to increase by 70 percent, the U.N.'s Food and Agricultural Organization says. But climate change may be the greatest impediment to meeting this target, say experts.

Growing numbers of people on earth is also resulting in rapid urbanization, placing serious strains on towns and cities as migrants move from poor rural areas to richer urban centers.

"The issue of population cannot be seen divorced from the aspect of resource or energy footprint," said Parvinder Singh, head of communications for ActionAid India.

"The largest drain continues to be in the West which have traditionally consumed, and continue to, massive volumes of resources because of a life-style and purchasing power that far exceeds that of so-called high population poorer countries."

Demographers however point out that in richer nations, fertility rates have nosedived, resulting in declining numbers of people and an imbalance between the working population and retirees who need expensive social safety nets.

"Where population is shrinking, we need family friendly policies. Where numbers are growing, we need policies to ensure women have access to family planning," said Babatunde Osotimehin, head of the U.N. Population Fund, adding 215 million women want reproductive health services but do not have it.

"If governments do not act, we will put further strains on the resources that we have."