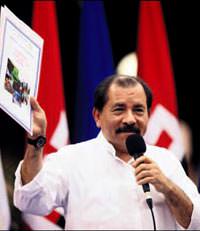 Ortega had 62.7 percent of the vote with returns in from 86 percent of polling stations in Sunday's presidential election. That was more than double the tally for his closest rival, conservative radio personality Fabio Gadea.

Ortega's supporters poured into the streets of Managua to celebrate. "I'm happy ... I think that people are convinced, they voted for social programs, voted for the future, voted for the poor," said lawyer Silvia Calderon, 54.

Gadea refused to accept the results and accused Ortega of voter fraud, but international election observers said voting irregularities had not changed the final outcome.

The huge victory margin is a personal triumph for a man who was long a divisive figure -- popular among supporters of his left-wing Sandinista party but distrusted by many and despised by business leaders because of economic chaos during his first term as president in the 1980s.

Opponents of Ortega said he had bent the rules to win re-election, pointing to a ruling by the Sandinista-controlled Supreme Court in 2009 to overturn a ban on consecutive terms.

Preliminary results showed his Sandinistas would win 55-60 of the 92 seats in Nicaragua's national assembly, close to the two-thirds majority needed to change the constitution.

Ortega, 65, has moderated some of his socialist policies since regaining the presidency five years ago and he has won praise for letting private businesses operate freely even as he pushed policies aimed at combating poverty.

The policies won widespread support in largely agrarian Nicaragua, which was Cold War battleground in the 1980s when his Sandinista government fought U.S.-backed Contra rebels.

"He's a person who looks after the poor and we have noticed the change," said 43-year-old Xiomara Amador, a former army nurse who lost her right leg in the 1980s conflict. "In 16 years of other governments, no-one helped the handicapped."

Ortega was a leader of the Sandinista revolution that toppled the Somoza family's brutal dictatorship in 1979.

U.S. President Ronald Reagan saw the Sandinistas as a threat and backed the right-wing Contras in a decade-long civil war that killed around 30,000 people and wrecked the economy.

Ortega was elected president in 1984 at the height of the war but was voted out in 1990 and then spent 16 years in opposition before bouncing back to power. He had gradually toned down his radical rhetoric and styled himself as a devout Christian by the time he won the last election in late 2006.

In a separate presidential vote, Guatemala elected another Cold War veteran on Sunday, but from the other side of the ideological divide: retired right-wing general Otto Perez.

Since winning the 2006 election with just 38 percent support, Ortega has overseen economic improvements and cemented his hold on Nicaragua. About 57 percent of its people now live below the poverty line, down from 65.5 percent in 2005, according to government and World Bank statistics.

The economy grew 4.5 percent in 2010 and is expected to expand 4 percent this year, making it one of the best performers in Central America, although it is still the second poorest country in the Western Hemisphere, behind Haiti.

Critics worry the Supreme Court's decision lifting a ban on consecutive presidential terms is evidence Ortega plans to further extend his rule, just as Chavez has in Venezuela.

"If you breach the constitution, you can mess with other things too," said Milton Ramirez, a 35-year sales executive who voted for Gadea. "We don't want another dictatorship."

Opponents also say Ortega has made the country too dependent on Venezuelan petrodollars, and that he has moved deliberately to weaken democratic institutions.

Gadea supporters accused Ortega's party of manipulating the electoral process on Sunday, stuffing ballot boxes and making it hard for conservatives to cast their vote.