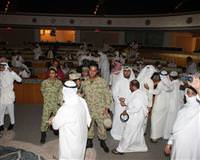 They said the protesters who forced their way into the debating chamber included some opposition lawmakers who have been among hundreds of people protesting outside parliament every week to demanding the removal of Sheikh Nasser, whom they accuse of corruption.

"The people want to bring down the head (of government)," the crowds chanted as the protesters who had entered parliament re-emerged to join those massed outside.

The chants echoed cries made by protesters in Egypt who in February forced Hosni Mubarak to step down after three decades as president.

Kuwait has escaped the mass protests that toppled Mubarak and Tunisia's Zine al-Abedine Ben Ali before him, thanks to a generous welfare system.

But the Gulf Arab state has endured a long political stalemate and opposition has built up against Sheikh Nasser, an influential member of the ruling family.

Some Kuwaiti news organizations and witnesses said riot police had beaten demonstrators as they assembled outside parliament.

A Reuters correspondent saw ambulances in the area, but it was not immediately clear if anyone had been hurt.

In May, two lawmakers attempted to question Sheikh Nasser over alleged misuse of public funds, a charge he denies. The request came days after he had unveiled his seventh cabinet.

The previous cabinet quit in March to avoid parliamentary questioning of three ministers.