A U.N. plan against Syria 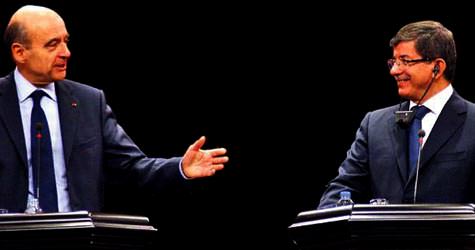 Any international intervention in Syria must not be unilateral and should be mandated by the United Nations, French Foreign Minister Alain Juppe said on Friday, warning of a "catastrophe" if the country was allowed to slide into civil war.

Speaking in the Turkish capital, Juppe said he was doubtful Syria would respond positively to the Arab League peace proposal and called for tougher sanctions against Damascus. He said France was ready to work with the Syrian opposition.

France withdrew its ambassador from Damascus on Wednesday and has said it was encouraging Syrian opposition groups but has so far remained opposed to outside military intervention.

Asked at a news conference in Ankara whether France expected some form of intervention in Syria by Turkey, Juppe said he was against any one-sided action.

"We are against unilateral intervention, if an intervention is implemented, the decision should be made by the United Nations. This has been France's opinion all along," Juppe told a news conference alongside Turkish Foreign Minister Ahmet Davutoğlu.

The Arab League suspended Syria's membership on Wednesday and gave it until the end of the week to comply with an Arab peace plan to end a crackdown on a revolt that has killed more than 3,500 people, according to a United Nations count.

Hundreds of people have been killed this month alone, one of the bloodiest periods in the revolt that began in March. Syria blames the violence on foreign-backed armed groups who it says have killed more than 1,100 soldiers and police.

France has said it is in contact with Syrian opposition groups and Juppe said that Paris was ready to work with the opposition but appeared to call on them not to use army defectors to mount attacks as that would lead to civil war.

"We are making a call to the Syrian opposition. To avoid a civil war, we hope that the army will not be mobilised, this would be a catastrophe," Juppe said.

Opposition sources said on Thursday army defectors had killed or wounded 20 policemen in a raid on an airforce intelligence complex near Damascus, the first of its kind in an eight-month revolt against President Bashar al-Assad.

Western nations have already imposed sanctions on Syria. France, together with Britain and Germany plans to ask the U.N. General Assembly's human rights committee to approve a resolution condemning the violence in Syria, before putting the non-binding measure to a vote in an Assembly plenary session.

"We defend our position that we have had from the start of being against violence, but it is now time to combine our efforts, to toughen sanctions. We need to study this at the U.N. General Assembly," Juppe said.

U.N. sanctions against Syria, however, are unlikely given opposition from Russia and China, which last month vetoed a draft Security Council resolution condemning Damascus.

The Arab League, which has traditionally shied away from action against its own members, has not said what would happen if Syria failed to comply with its proposal, but it has asked experts to draft recommendations for economic sanctions.

Turkey, which has stepped up its criticism of one-time ally Syria, has said it is preparing sanctions that will target the government but has not provided anymore details.

Davutoglu said on Thursday more international pressure was needed on Syria to bring an end to the bloodshed.

"The most important issue now is to increase pressure on Syria to stop the killings. We will support the Arab League plan," Davutoglu said.

"If this plan is not implemented by Syria, some measures will need to be taken, especially economic sanctions."