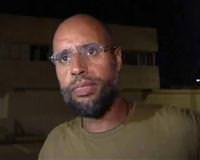 Muammar Gaddafi's son and heir apparent Saif al-Islam has been detained in the southern desert, Libya's interim justice minister and other officials said on Saturday.

They said Saif al-Islam and several bodyguards, but no other senior figures from the ousted administration, had been taken near the town of Obari by fighters based in the western mountain town of Zintan

"We have arrested Saif al-Islam Gaddafi in the Obari area," Justice Minister Mohammed al-Alagy told Reuters, adding that the 39-year-old who is wanted for crimes against humanity by the International Criminal Court at The Hague was not injured.

Another senior official in the executive of the National Transitional Council (NTC) told Reuters that the interim government was still checking the details of what had happened.

There was no word of the other official wanted by the ICC, former intelligence chief Abdullah al-Senussi.

The news broke as fighters from Zintan, a powerful faction among the many armed groups currently dominating Libya while the NTC tries to form a new government, started celebrating in Tripoli.

Bashir Thaelba, a Zintan field commander who had called a news conference on another issue, told reporters in the capital that Gaddafi would be held in Zintan until there was a government to hand him over to. The government is due to be formed within days.

"The rebels of Zintan announce that Saif al-Islam Gaddafi has been arrested along with three of his aides today," Thaelba said in remarks carried on Libyan television. "We hope at this historical moment that the future of Libya will be bright."

Gaddafi's father was killed a month ago on Sunday after being captured in his hometown of Sirte on the coast.