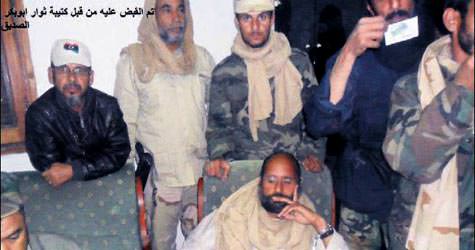 Libya stood firm on Sunday over the trial of Muammar Gaddafi's son Saif al-Islam, saying its courts could judge him fairly, defying the International Criminal Court, which says it is its right try him at The Hague for crimes against humanity.

As news came in of the capture of Gaddafi's feared intelligence chief, Abdullah al-Senussi, officials said he, too, would be given a fair trial in Libya.

The ICC has indicted Saif al-Islam for allegedly ordering the killing of unarmed protesters during the uprising that brought an end to his father's 42-year rule. It has indicted Senussi on the same charge of crimes against humanity.

A month after the elder Gaddafi - also indicted by the ICC - was captured, tormented and killed, Saif al-Islam was caught in the country's southern desert on Saturday, where he had grown out his beard and donned the flowing robes of local nomadic tribesmen. Senussi was caught in the same region a day later.

The government has said it will try Saif al-Islam in Libya, but with ICC prosecutor Luis Moreno-Ocampo's imminent arrival in the country bringing Libya's international obligations into focus, ministers insisted their courts were up to the job.

"The Libyan judicial system is capable of prosecuting people of Saif's stature," Libyan interim justice minister Mohammed al-Alagi told Reuters. "The important thing is to ensure a fair trial. We have been preparing for this for months."

Alagi has said he does not want to retain his post in a new interim government due to be formed this week.

The ICC is only supposed to try cases which nation states are unwilling or unable to prosecute, and here it is the strength of Libya's judicial system that is in doubt.

Many observers says that after Gaddafi spent four decades hollowing out Libya's public institutions, the judiciary can not handle cases as sensitive and complex as these, least of all in the poisoned atmosphere that follows a civil war.

"It has no viable judicial system. Any system that existed was deliberately eradicated over four decades," said Richard Dicker, international law expert at Human Rights Watch.

Like many countries, Libya does not have the offence of crimes against humanity on its statute books. In a state that needs to be rebuilt from the ground up, there are also obvious concerns about security and the rule of law generally.

A U.N. Security Council resolution passed in February in response to the crackdown on protesters imposes a duty on the Libyan authorities to cooperate with the ICC. The court says that Libya must either hand over Saif al-Islam or obtain the ICC's permission to hold a trial in Libya.

Given the paltry state of Libya's institutions, it is unlikely that Tripoli can convince the ICC it is capable of holding a trial that will meet international standards.

To make matters worse for the prime minister designate, Abdurrahim El-Keib, who is picking an interim cabinet before elections next year to a constituent assembly, public opinion is strongly in favor of trying Gaddafi's strongmen in Libya.

"Of course he should be tried in Libya. It's not just me who thinks so. All Libyans want him to be tried here," football player Qais Abdel Nasser, 29, said on Saturday in Benghazi, where the uprising against Gaddafi began in February.

"I think the ICC will just keep him away from Libyans and he will have a comfortable life. He'll still be able to communicate with Gaddafi supporters from inside prison," he added.

Facing such a difficult choice between its international legal obligation to go through The Hague, which is unlikely to allow a trial in Libya any time soon, and the political reality, Keib will be under pressure to find an acceptable compromise.

There are, however, few obvious alternatives to trying Gaddafi and Senussi at The Hague, which risks angering many Libyans, and holding a trial in Libya without ICC authorization, which is likely to upset the West, violate international law, and provoke accusations of victors' justice.

ICC spokesman Fadi El Abdallah said a third option could be for the ICC to hold trials in Libya rather than at its Dutch headquarters, though how that would work in detail was unclear

"It is possible for ICC judges to organize a trial in the country if deemed appropriate," El Abdallah said.

One potential model for a local trial with international input might be those held in Iraq under a special tribunal set up during the U.S. military occupation to try Saddam Hussein and his senior aides and generals in Baghdad.

Michael Scharf, law professor at Case Western Reserve University, was an adviser who helped train Iraqi judges for those trials. He noted that the ICC indictments, a factor not present in Iraq, made for different choices in Libya, and he said that handing the suspects to The Hague would make sense.

To seek international assistance for trials in Libya, he said, the government might find the going hard unless it abolished the death penalty - unlikely to be a popular move at home - since many international jurists would steer clear of involvement with a system engaged in capital punishment.

And, saying that the Iraqi tribunal was "ruined" by government interference, notably in the selection of judges, Scharf added: "It's not clear that the government and the courts in Libya can get that kind of independence and separation, and that would be a real problem for them.

"The easiest thing for them is just to surrender them to the international tribunal - they'd get all sorts of kudos, the international community would applaud them for doing so and then if they want they could have trials of people at a lower level."