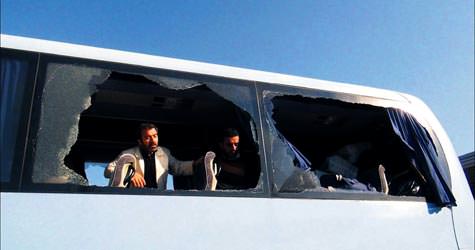 Gunfire was opened on a convoy of Turkish buses in Syria carrying pilgrims returning from the Hajj pilgrimage in Saudi Arabia early on Monday, wounding two Turks.

Turkish pilgrimages were returning to their nation after having completed the Hadj pilgrimage when they were shot at while driving on a highway near Homs. Syrian soldiers strafed the convoy of buses using long-barreled weapons. The driver of one of the busses in the line of fire Naci Özata was shot at in the groin. Also wounded was Cemil Karlı, a Turkish passenger returning from the Hajj pilgrimage, who was hit slightly in one arm and leg.
The incident occurred in the early morning hours of Monday nearby the town of Rastan in Homs, an area which has felt the events more intensely. According to statements from passengers, the bus transporting the pilgrims on their return from Saudi Arabia got lost within Syria. When passengers disembarked the bus in order to ask for directions, Syrian soldiers began insulting Prime Minister Recep Tayyip Erdoğan and then proceeded to attack the pilgrims. One passenger, Mahmut Şimşit, was seriously beaten by Syrian security forces, while five other pilgrims were taken into custody.

MINISTRY OF FOREIGN AFFAIRS TAKES ACTION
After the incident, the bus transporting the Turkish Hajj pilgrims arrived at Hatay's Cilvegözü border gate where they requested help from Turkish authorities. Chair of the Diyarbakır Procession Şaban Kılıç stated that those taken into custody were released with the Foreign Affairs Ministry's aid.

'THESE ARE DANGEROUS THINGS'
The wounded were admitted to the Antakya State Hospital, while last night all of the other Hajj pilgrims returned to their homes. When President Gül received information regarding the attack during his trip in England, he noted that the bus carrying Turkish Hajj pilgrims had taken the wrong road and stated, "The procession went into an area of distress and that could have contributed to what happened. These are dangerous things. I hope that nothing like this happens again."
ENGLAND TO INCREASE CONTACT WTH SYRIAN OPPOSITION
Yesterday in Syria, military troops continued to stage operations against civilians. According to the Syrian Human Rights Watch, conflict in Homs resulted in 12 deaths and two people wounded. Nearby Al-Qusayr two people were killed and eight wounded. In addition, three people were killed in other regions. Also according to claims, activist and photographer Ferzat Cibran who was being held in custody in Hama, died as a result of torture. England's Minister of Foreign Affairs William Hague noted that after accepting one group of members from the Syrian opposition, he will then increase his contact with the opposition.