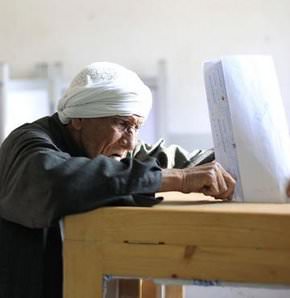 Egyptians voted in droves on Monday in the first election since the fall of longtime ruler Hosni Mubarak, giving Islamists a chance to make political gains even as the army generals who replaced him cling to power.

Turnout in the country's first free poll in decades was high but despite voters' enthusiasm, concern still lingered that the military was more focused on preserving its privilege and power than on nurturing democratic transformation.

Frustration erupted last week into violent protests that cost 42 lives, mostly around Cairo's Tahrir Square, center of the popular uprising that forced the end of Mubarak's 30-year-rule in February.

"We are at a crossroads," Field Marshal Mohamed Hussein Tantawi said on the eve of polling, referring to successful elections or "dangerous hurdles" that the armed forces would not allow.

Fears of unrest did not appear to have deterred voters. After a few hours of polling, the election commission chief said turnout was higher than expected but gave no details.

Many analysts expect the Muslim Brotherhood's party and other Islamists to do well but much remains uncertain in Egypt's complex voting system of party lists and individuals.

In Cairo, Alexandria and other areas festooned with posters, voters formed long queues, where many of them debated Egypt's political future, hoping that for the first time they could shape the destiny of this Arab nation of 80 million people.

"Aren't the army officers the ones who protected us during the revolution?" one woman asked loudly at a polling station in Cairo's Nasr City, referring to the army's role in easing Mubarak from power. "What do those slumdogs in Tahrir want?"

One man replied: "Those in Tahrir are young men and women who are the reason why a 61-year-old man like me voted in a parliamentary election for the first time in his life today."

Parliament's lower house will be Egypt's first nationally elected body since Mubarak's fall and those credentials alone may enable it to dilute the military's monopoly of power.

The world is closely watching the election, keen for stability in Egypt, which has a peace treaty with Israel, owns the Suez Canal linking Europe and Asia, and which in Mubarak's time was an ally in countering Islamist militants in the region.

Political transformation in Egypt, traditional leader of the Arab world, will reverberate across the Middle East, where a new generation demanding democratic change has risen against autocrats who have ruled for decades.

Washington and its European allies have urged the generals to step aside swiftly and make way for civilian rule.

There were no reports of serious violence. Scuffles among women voters erupted at one Alexandria polling station that opened late because ballot papers had not arrived. Troops outnumbered police guarding polling stations. Judges and thousands of monitors were scrutinizing voting procedures.

Oppressed under Mubarak, the Muslim Brotherhood and other Islamist parties have stood aloof from those challenging army rule, unwilling to let anything obstruct elections that may open a route to political power previously beyond their reach.

Tents of protesters demanding an immediate end to army rule still stood in Tahrir Square but after heavy overnight rain it was far from crowded.

At least 1,000 people queued outside one polling station in Cairo's Zamalek district when it opened at 8 a.m. (1 a.m. ET).

"We are very happy to be part of the election," said first-time voter Wafa Zaklama, 55. "What was the point before?"

In Alexandria, Egypt's second city, men and women voted in separate queues. Posters for Islamist parties, such as the Muslim Brotherhood's Freedom and Justice Party (FJP), the Salafi Nour Party and the moderate Wasat Party adorned the streets.

"This is the first real election in 30 years. Egyptians are making history," said Walid Atta, 34, an engineer waiting to vote at a school on his way to work.

The segregated voting for men and women in Alexandria and many other places was a reminder of the conservative religious fabric of Egypt's mainly Muslim society, where Coptic Christians comprise 10 percent of a population of more than 80 million.

Myriad parties have emerged since the removal of Mubarak, who rigged elections to ensure that his now-dissolved National Democratic Party dominated parliament. The NDP's charred headquarters, torched in the popular revolt, still stands like a tombstone on the banks of the Nile.

Under a complex electoral system, voters pick both party lists and individual candidates.

Individual winners are to be announced on Wednesday, but many contests will go to a run-off vote on December 5. List results will not be declared until after the election ends on January 11

About 17 million Egyptians are eligible to vote in the first two-day phase of three rounds of polling for the lower house.

In the Nile Delta city of Damietta, some voters said they would punish the Brotherhood for its perceived opportunism.

"I think the Brotherhood has lost more in the past three months than it built in the last three decades," said tour operator Ayman Soliman, 35, adding that his vote would go to the moderate Islamist Wasat Party.

Nevertheless, the Brotherhood has formidable advantages that include a disciplined organization, name recognition among a welter of little-known parties and years of opposing Mubarak.

Brotherhood organizers stood near many polling stations with laptops to help people find where they should vote, printing out a paper with the FJP candidate's name and symbol on the back.

Egyptians seemed enthused by the novelty of a vote where the outcome was, for a change, not a foregone conclusion.

"We are seeing clear signs of voter excitement and participation, as evidenced by long lines at polling stations, and it appears to be a genuine contest," said Les Campbell, of the Washington-based National Democratic Institute.

The army council has promised civilian rule by July after the parliamentary vote and a presidential poll, now expected in June -- much sooner than previously envisaged.

But army council member General Mamdouh Shahin said on Sunday the new assembly would have no right to remove an army-appointed government using its "presidential" powers.

On Friday, the army named Kamal Ganzouri to form a new cabinet, a choice quickly rejected by protesters in Tahrir Square demanding that generals step aside immediately in favor of a civilian body to oversee the transition to democracy.