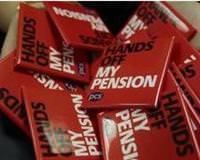 Teachers, hospital staff and border guards will be among workers taking part in Britain's first mass strike for more than 30 years on Wednesday, adding to pressure on a coalition facing a weakening economy.

Up to 2 million public sector workers are protesting over reforms that unions say will force them to pay more for their pensions and work for longer before they can retire.

The government says reform is needed as people are living longer and public service pensions are unaffordable.

The stoppage will hit services as diverse as health, refuse and tax collection, close schools and probably bring chaos to ports and airports as border control staff walk out.

Airlines said on Monday they were cutting flights into London Heathrow, Europe's busiest airport, because of fears of long delays and overcrowding due to the passport control strike.

The government has flown some embassy staff home and recruited volunteers from other departments to help take the place of striking border guards.

Reacting to grim economic forecasts on Tuesday, the Conservative-led coalition government said a further dose of austerity was needed to keep its deficit-cutting plan on track.

Finance Minister George Osborne said pay rises for public sector workers, who are already enduring a two-year freeze, would be capped at one percent from 2013, while job losses would shoot up to 710,000 from an original estimate of 400,000.

Brendan Barber, general secretary of the Trades Union Congress, an umbrella group coordinating the strike, said workers were no longer being asked to make "a temporary sacrifice, but accept a permanent deep cut" in living standards when you include pay and pension contributions.

"It is no wonder that the government has alienated its entire workforce who are coming together in unprecedented unity tomorrow to take a stand against such unfair treatment," he said.

A coalition of 30 trade unions will take part in the strike, billed as the biggest walkout since action during the "Winter of Discontent" in 1979 that helped Conservative leader Margaret Thatcher sweep to power.

Unions have organized 1,000 demonstrations and rallies across the country and picket lines will spring up around public buildings and hospitals.

The dispute mirrors those in other European countries where countries are grappling with tight budgets and ageing populations.

Prime Minister David Cameron condemned the strike as "irresponsible," urging unions to continue talking as negotiations on pensions run until the end of the year.

Unions insist it is ministers who are unwilling to negotiate.

Dave Prentis, who heads Unison, a union representing 1.4 million workers, said on Monday unions wanted a settlement but that more strikes could follow next year if the government failed to budge.