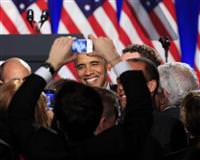 President Barack Obama defended his policy toward Israel on Wednesday at a political fundraiser where a prominent American Jewish leader mentioned concerns in the Jewish community about the U.S.-Israeli relationship.

Obama, who has been criticized by some of Israel's U.S. supporters for being tough on a close ally and has had strained ties with Israeli Prime Benjamin Netanyahu, offered strong assurances of his commitment to Israel's security.

"I try not to pat myself too much on the back, but this administration has done more for the security of the state of Israel than any previous administration," Obama said. "We don't compromise when it comes to Israel's security ... and that will continue."

The president was speaking to campaign donors at the Manhattan home of Jack Rosen, chairman of the American Jewish Congress, who said "it would be remiss for me not to say there are many in the Jewish community who are concerned" about the relationship between Israel and the United States.

Rosen added, however, that "America has never been as supportive of the state of Israel as President Obama and his administration."

The White House wants to shore up support among Jewish voters for Obama's 2012 re-election bid. He won nearly eight of every 10 Jewish voters in 2008, but a slip would jeopardize his re-election drive in battleground states like Florida and Pennsylvania, where they are an important swing bloc.

Obama faced criticism from some Jewish leaders earlier this year when he insisted that any negotiations on the borders of a future Palestinian state begin on the basis of lines that existed before Israel captured the West Bank and Gaza Strip in a 1967 war. His Middle East peace efforts have mostly stalled.

But Obama won praise from Israel and its backers for his opposition to a Palestinian push beginning in September to win U.N. statehood recognition, and he has also been credited for taking a tough line with Iran, Israel's arch-enemy.

"No ally is more important than the state of Israel," Obama said at the fundraiser, which collected at least $300,000 from wealthy donors for his re-election bid and other Democratic campaigns.