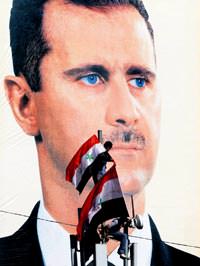 The Arab League, which voted to impose sanctions on Syria for failing to end a crackdown on protesters, has listed 17 people banned from travel to Arab states, including President Bashar al-Assad's brother, Egypt's state news agency said on Thursday.

Breaking with decades of inaction against any of its 22-member states, the Arab League has suspended Syria from the pan-Arab organisation and imposed sweeping economic sanctions. Only Syria's neighbours Iraq and Lebanon voted against the move.

Syria says the League has declared "economic war" with sanctions imposed on its central bank after Damascus ignored demands to end its nine-month crackdown on protests.

The list of names banned from travelling to Arab states, drawn up by a committee commissioned by the League to handle implementation of measures, included the defence and interior ministers, intelligence officials and senior military officers.

The president's brother, Maher al-Assad, who was listed, commands the Republican Guard and is Syria's second most powerful man. Assad's cousin and Syria's richest businessman was also on the list.

The names and other recommendations will be presented to group of Arab ministers, led by Qatar, who have been handling the Syria file. The ministers meet in Doha on Saturday, the agency reported.

An Arab League committee also proposed stopping flights to and from Syria starting mid-December and recommended exempting wheat and related food items, medicine, gas and electricity from the embargo, the agency reported.

Syria's neighbour and biggest trade partner, Turkey, stopped credit dealings and froze Syrian state assets on Wednesday. It said it may create a buffer zone to house Syrian refugees that it fears would flock to Turkey if the violence worsens.