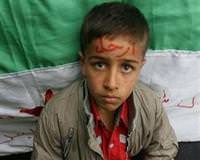 The United Nations top human rights forum strongly condemned Syria on Friday for "gross and systematic" violations by its forces, including executions, and set the stage for possible action by U.N. political bodies in New York.

The 47-member forum adopted a resolution put forward by the European Union by a vote of 37 states in favor and four against, including China and Russia, with six abstentions.

The text called for the "main bodies" of the U.N. to consider a U.N. report which found that crimes against humanity had been committed by the government of President Bashar al-Assad and "take appropriate action."

It also established the new post of a special human rights investigator on Syria. There have been 4,000 killed, 307 of which were children.

Syria's ambassador to the U.N. in Geneva, Faysal Khabbaz Hamoui, denounced the resolution as "politicized" and aimed at "closing the doors" to constructive cooperation. He urged countries to vote against it.

The United States, which voted in favor, welcomed the result at the third emergency session held on Syria this year. All five Arab members -- Jordan, Kuwait, Libya, Qatar and Saudi Arabia -- also backed the text.

"We've set the stage in a very substantive way for strong action by the U.N. if other entities choose to take the opportunity," U.S. ambassador Eileen Chamberlain Donahoe told Reuters.

"The evidence we have seen leaves no doubt about the complicity of Syrian authorities and provides a very strong basis for accountability to go forward in other institutions where that is their mandate."

Asked whether this meant the International Criminal Court, she replied: "Absolutely, including the ICC if the Security Council chooses to refer this matter."

German Foreign Minister Guido Westerwelle, in a statement issued in Berlin after the vote, said: "The international community's track regarding the Assad regime is clear: those who trample over human rights in this way must reckon with ostracism and sanctions. It is high time that the U.N. Security Council sends an unambiguous signal."

Catherine Ashton, EU foreign policy chief, said in a statement: "The resolution, adopted by an overwhelming majority, takes our action to a higher level... As long as the repression goes on, we shall continue to press for strong UN action to ensure the safety and protection of the Syrian people."

Earlier, the U.N. rights chief urged world powers to take action to protect Syrian civilians from "ruthless repression," but her call was swiftly criticized by China and Russia.

More than 4,000 people have been killed during a military crackdown on street protesters that started in March and more than 14,000 people are believed to be in detention, said U.N. High Commissioner for Human Rights Navi Pillay.

"In light of the manifest failure of the Syrian authorities to protect their citizens, the international community needs to take urgent and effective measures to protect the Syrian people," Pillay told the special session on Syria.

She did not spell out what measures world powers should take - Western leaders have in the past shied away from suggestions of military action, along the lines of the NATO campaign that helped rebels unseat Libyan leader Muammar Gaddafi in August.

The European Union called for "pro-active action" by the international community, while Kuwait's envoy said that there may be a need for "intervention" to safeguard Syrian civilians.

The United States, the EU, members of the Arab League and neighboring Turkey have already imposed sanctions on Syria over Assad's failure to implement commitments to withdraw tanks and troops from restive cities and start talks with his opponents.

After Pillay spoke, envoys from Russia and China, which both have oil projects in Syria, took the floor to warn against foreign interference in Syria in the name of human rights.