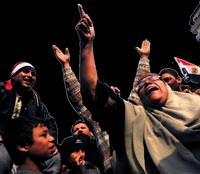 The Muslim Brotherhood's party will seek to extend a lead over hardline Islamists in run-offs in Egypt's parliamentary vote Monday, with liberal parties struggling to hold their ground in a political landscape redrawn by the overthrow of Hosni Mubarak.

The Brotherhood's Freedom and Justice Party is set to take most seats in Egypt's first democratic parliament in six decades, strengthening their hand in a struggle for influence over the Arab world's most populous country.

Banned from formal politics until a popular uprising ended Mubarak's three-decade rule in February, the movement emerged as the main winner from last week's first-round vote and called on its rivals to "accept the will of the people."

The phased election runs over six weeks, ending in January.

Opponents accuse the Brotherhood's slick campaign machine of flouting a ban on canvassing near polling stations and say it handed out food and medicine to secure votes, but monitors said polling seemed fair overall.

"You cannot have democracy and then amend or reject the results," Amr Moussa, a front-runner for Egypt's presidency, told Reuters, adding that the shape of parliament would not be clear until the voting was over.

The Brotherhood, Egypt's best-organized political group and popular with the poor for its charity work, wants to shape a new constitution to be drawn up next year.

That could be the focus of a power struggle with the ruling military council, which wants to keep a presidential system, rather than the parliamentary one favored by the Brotherhood.

Egyptians return to the polls Monday for 52 run-off votes for individual candidates, who will occupy a third of the 498 elected seats in the lower house once two more rounds of the complicated voting process end in January.

The run-offs will pit 24 members of the ultra-conservative Islamist al-Nour party against Brotherhood candidates.

Two-thirds of the seats in the assembly are allocated proportionately to party lists.

Figures released by the election commission and published by state media show a list led by the Brotherhood's FJP securing 36.6 percent of valid party-list votes, followed by the Salafi al-Nour Party with 24.4 percent, and the liberal Egyptian Bloc with 13.4 percent.

The result has unnerved Israel, concerned about the fate of its 1979 peace treaty with Egypt. Prime Minister Benjamin Netanyahu called on Egypt's future rulers to preserve the deal.

"We hope any future government in Egypt will recognize the importance of keeping the peace treaty with Israel in its own right and as a basis for regional security and economic stability," Netanyahu said Sunday.

The fate of the peace deal between Egypt and Israel is a concern for its sponsor, the United States, which has backed it with billions of dollars in military aid for both countries.

The rise of the Salafis has also sparked fear among many ordinary Egyptians because of the group's uncompromising views.

Analysts say the Brotherhood, which topped the first-stage vote, has a pragmatic streak that makes it an unlikely ally for Salafis who only recently ventured from preaching into politics and whose strict ideology suggests little scope for compromise.

The leader of Salafi party al-Nour Emad Abdel Ghaffour made it clear he would not play second fiddle to the Brotherhood.

"We hate being followers," Ghaffour told Reuters in an interview. "They always say we take positions according to the Brotherhood but we have our own vision... There might be a consensus but ... we will remain independent."