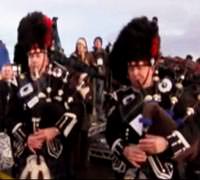 A pair of pampered giant pandas arrived in Scotland Sunday to a reception of cheering and flag-waving crowds while British officials said the 10-year loan of the bears by China strengthened ties between the two countries.

Tian Tian and Yang Guang -- whose names in English are Sweetie and Sunshine -- arrived at Edinburgh airport after flying in from Chengdu, Sichuan province, and were later greeted at Edinburgh zoo by around 450 people waving Chinese and Scottish flags.

Since the 1950s, China has given away pandas as gestures of goodwill in what has come to be known as "panda diplomacy."

Modern China gave its first pair of giant pandas to Britain in 1974.

British Deputy Prime Minister Nick Clegg said: "I know that a huge amount of work has gone into securing their loan and they will be a great showcase for UK-China links in science and research."

Afforded a reception worthy of a state visit, the bears' journey on a private plane was no less extravagant, with four crew members, two attendants, one veterinarian and a cargo handler among the retinue.

Ahead of the flight, veterinarian Tang Chunxiang said he was worried about the pandas' nerves and fear of flying.

"They might get air sick, they may get a bit dizzy on the plane," he said. "...if there is any problem, we have brought some simple medicine."

Visible through clear containers after being unloaded from the plane, the bears appeared nonplussed by the fanfare, one munching on food calmly as a photographer snapped away nearby.

The eight-year-old pair, raised at the Giant Panda Conservation and Research Center in Ya'an, Sichuan, will become Britain's first pair of breeding pandas in 17 years.

Iain Valentine, director of conservation and research at the Royal Zoological Society of Scotland, was pleased that five years of negotiation with the Chinese authorities had finally paid off.

"This is the exciting bit, this is the bit I have been waiting for a very long time," he said.

Tian Tian and Yang Guang will not go on display at Edinburgh Zoo for at least a week, until they have settled into their new surrounds. They will remain there for 10 years, after which they, and any young they have, will be returned to China.

Edinburgh Zoo said that, as part of the loan deal, it would pay $1 million a year to China, 90 percent of which would pay for conservation and genetics research. The zoo will also have to find up to 70,000 pounds a year to provide around 18,000 kg (almost 20 tons) of bamboo shoots, most of which will come from a special nursery outside Amsterdam.

Considered a national treasure, the giant panda is seen as having come back from the brink of extinction, but remains under threat from logging, agriculture and rapid urbanization.

There are an estimated 1,600 living wild in China, almost all in Sichuan. Around 300 are in captivity around the world, the vast majority of them inside China.

Pandas are notoriously difficult to breed because females ovulate only once a year and can only become pregnant during a two- or three-day period.