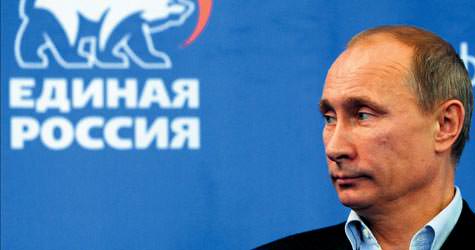 Several thousand protesters took to the streets on Monday to demand an end to Russian Prime Minister Vladimir Putin's 12-year rule after voters cut his party's parliamentary majority in an election that was condemned as unfair by European monitors.

Police said they detained 300 people in Moscow, where they confronted a crowd of 3,000 to 5,000 chanting "Revolution!" and "Russia without Putin" in one of the biggest opposition protests in the capital in years.

Police scuffled with some protesters and formed a line to hem them in and prevent them marching towards the Kremlin. Some managed to break away and head towards the seat of power, but at least 30 were seized before they got there.

The Central Election Commission said the prime minister's United Russia party was set to have 238 deputies in the 450-seat State Duma after Sunday's vote, compared with 315 seats in the current lower house.

The result was Putin's worst election setback since he came to power 12 years ago and signaled growing weariness with his domination of Russian politics as he prepares to reclaim the presidency in an election next March.

President Dmitry Medvedev said Sunday's election was "fair, honest and democratic," but European monitors said the field was slanted in favour of United Russia and the vote was marred by apparent manipulations.

The United States has "serious concerns" about the conduct of the election, a White House spokesman said.

The observers said there had been "serious indications of ballot box stuffing" in a harsh verdict on the election that suggested United Russia could have suffered an even bigger decline in support if the voting had been completely fair.

They also said the election preparations "were marked by a convergence of the state and the governing party, limited political competition and a lack of fairness."

"The country has never seen such a dirty election," said Communist Party leader Gennady Zyuganov, who dismissed the official results as "theft on an especially grand scale."

Former Soviet leader Mikhail Gorbachev, who has compared United Russia to the Soviet Communist Party and advised Putin not to return to the presidency, said the election was "not the most honest."

"We do not have real democracy and we will not have it if the government is afraid of their people, afraid to say things openly," Gorbachev, the father of far-reaching reforms in the final years of the Soviet Union, said on Ekho Moskvy radio.

Putin says he brought stability to Russia after the chaos in the years that followed the collapse of the Soviet Union in 1991 and that Russians benefited from an economic boom fuelled by high oil prices during his presidency from 2000 to 2008.

But many Russians now complain of widespread corruption and the growing gap between the rich and poor, and an increasing number say they are disillusioned with Putin and his party.

Putin, 59, defended the party's performance at a government meeting, saying a simple majority of 226 was enough to pass most legislation, and suggested this was sufficient to maintain stability.

"United Russia has been a significant part of the foundation of our political stability in recent years, so its successful performance in the election was important not just for the government but, in my view, for the whole country," he said.

But Medvedev, who led the party into the election at Putin's behest, said voters had sent "a signal to the authorities" and hinted that officials in regions where the party did badly could face dismissal if they do not shape up.

"United Russia did not do too well in a series of regions, but not because people refuse to trust the party itself ... but simply because local functionaries irritate them," he said.

"They look and they say ... if that's United Russia, there's no way I'm going to vote for him."

Opponents said United Russia's official result -- just under 50 percent of the vote -- was inflated by fraud and that it could, in reality, have received far fewer votes.

Although Putin is still likely to win a presidential election next March, the result could dent the authority of the man who has ruled with a mixture of hardline security policies, political acumen and showmanship.

Some voters have been alienated by his suggestion that he and Medvedev, the protege he tapped as successor in 2008 after serving the limit of two consecutive terms as president, had agreed long ago that his protege would step aside next year.

Putin has cultivated a tough man image with stunts such as riding a horse bare-chested, tracking tigers and flying a fighter plane. But the public appears to have wearied of the antics and his popularity, while still high, has fallen.

Some fear Putin's return to the presidency may herald economic and political stagnation.

Putin has as yet no serious personal rivals as Russia's leader. He remains the ultimate arbiter between the clans which control the world's biggest energy producer.

The Communists made big gains to 92 seats in the Duma and official projections put left-leaning Just Russia on 64 Duma seats, up from 38. Vladimir Zhirinovsky's nationalist LDPR will have 56 seats.

The other three parties on the ballot, including the liberal Yabloko, fell short of the 5 percent threshold needed to gain even token representation in the Duma.

A prominent party of Kremlin foes led by Putin's first-term prime minister Mikhail Kasyanov was barred from the ballot.

Medvedev said alleged violations must be investigated but asserted that there was no major fraud.

The result is a blow for Medvedev, whose legitimacy to become prime minister in the planned job swap with Putin after the presidential vote could now be in question.