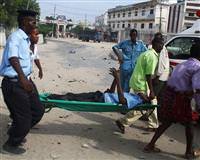 A car bomb exploded yards from the Turkish embassy in the Somali capital on Tuesday, the latest in a wave of deadly attacks in the coastal city, and a health official said three people were killed.

The suicide attack piles yet more pressure on a Western-backed government that relies on African Union troops to prop it up and fight an insurgency by Islamist militants who control virtually all of the country outside the capital Mogadishu.

Ali Muse, coordinator of ambulance services in Mogadishu, said three civilians were killed and eight wounded by the blast. Witnesses reported seeing smoke rising near an old cinema between the Turkish embassy and the Kilometre 4 (K4) junction, a busy intersection in Mogadishu's administrative district.

A traffic policeman told Reuters that the security forces stopped a vehicle earlier on Tuesday.

"The troops tried to question the driver and take photographs when the suicide bomber detonated his bomb," Abdiweli Elmi, a policeman on patrol at the junction said.

He said there were numerous casualties. "I saw the bodies of two policemen and one civilian," Elmi said.

It was not immediately clear who was behind the attack.

The al Shabaab rebel group, which has fought to topple the government since 2007, has intensified the frequency of suicide attacks in Mogadishu since its withdrawal from most of their bases in the capital in August.

A Reuters witness said human body parts could be seen around the ripped-apart car and security forces fired into the air to disperse the crowds.

Turkey's Anatolian state news agency said a vehicle laden with a bomb exploded 50 metres away from the embassy, which re-opened last month. Anatolian said no embassy staff were wounded or killed.

A Turkish government official said the target of the attack was unknown.

Turkey was the first state from outside the immediate region to open an embassy in Mogadishu.

Its interests have been the target of violent incidents since Prime Minister Tayyip Erdogan visited Mogadishu in August. Erdogan was the first leader from outside Africa to visit the capital for nearly two decades.

The following month more than 70 people were killed when a suicide car bombing, claimed by the al Qaeda-linked al Shabaab, exploded near a building where Somali students had gathered to register for Turkish scholarships.

Last week a hand grenade was lobbed at a Turkish health care centre in Mogadishu, killing one security guard.

The Islamist militants, who control large swathes of Somalia, are also fighting against Somali government and Kenyan troops in the rebel-controlled southern and central parts of the country. Ethiopian forces have also crossed into Somalia.