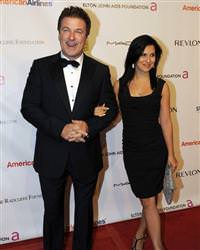 Actor Alec Baldwin was involved in a dispute with an American Airlines flight attendant on Tuesday and asked to disembark an airplane because he was playing a smart-phone word game before departure.

"Alec was asked to leave the flight for playing 'Words with Friends' while parked at the gate. He loves WWF so much that he was willing to leave a plane for it, but he has already boarded another AA flight," Baldwin's spokesman Matthew Hiltzik said in a statement.

"Flight attendant on American reamed me out 4 playing WORDS W FRIENDS while we sat at the gate, not moving," tweeted the "30 Rock" actor.

Baldwin's tweets and his spokesman's statement came after a passenger on the flight from Los Angeles International Airport to New York City, posted on Twitter, "On an AA flight at LAX. Alec Baldwin removed from the plane We had to go back to the gate. Terrible that everyone had to wait."