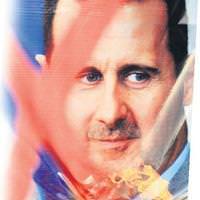 Syria said it had conditionally approved an Arab League peace plan to end eight months of unrest which threatens to drag the country to civil war and activists said at least 60 bodies were taken to hospitals in the central city of Homs on Monday.

In a letter to the League by Foreign Minister Walid al-Mualem, Syria rejected foreign interference and demanded the annulment of sanctions plus reinstatement in the regional bloc.

In Cairo, Arab League secretary general Nabil Elaraby said "the conditions contained new elements that we have not heard before". Arab foreign league ministers were studying the response.

Syria is facing Arab and international sanctions in response to its violent crackdown on protests against President Bashar al-Assad. In the latest response to the sanctions, French oil major Total said it will stop production in Syria.

Syria meanwhile has retaliated against northern neighbour Turkey for the sanctions imposed by its former friend, imposing a tariff of 30 percent on its imports and prohibitive duties on fuel and freight. Turkey shrugged it off, saying "common sense" should tell Syria that its own people would suffer most.

In a display of muscle that could be intended to deter any idea of foreign military intervention in a crisis which has killed at least 4,000 people, the army staged an exercise with missiles, rockets, tanks and helicopters.

Top generals watched the war games and state television made it the headline news story, even as the death toll mounted.

Activists in Homs said more than 60 bodies were taken to several hospitals in the city. The circumstances of their deaths were not immediately clear, they said.

Activists and residents in several neighbourhoods reported a spate of kidnappings since Sunday, a tactic used in recent sectarian killings in the city.

The British-based Syrian Observatory for Human Rights said pro-Assad militia kidnapped and killed at least 34 people from anti-Assad districts on Monday. An activist in the city said at least 32 other bodies were taken to the national hospital on Monday, including both supporters and opponents of Assad.

Already hit by economic sanctions imposed by the United States and Europe, Syria was punished last month by neighbouring states, with sanctions announced by the Arab League and imposed by Turkey, once Assad's ally.

The Arab League's sanctions have yet to take effect. It has repeatedly extended deadlines for Damascus to agree to a peace plan that would see Arab monitors oversee its withdrawal of troops from towns. The latest expired on Sunday.

"The protocol is intended to be signed soon," he said. "The Syrian government has responded positively ...I am optimistic, although I await the Arab League response first."

Syria says the Arab proposal to admit observers infringes its sovereignty, and has asked for clarification. It has stalled more than once and reneged on promises to rein in its forces.

"The Arab League sanctions ... have been a shock for every Syrian and Arab citizen ... as these sanctions came from sisterly countries," state news agency SANA said.

"Syria will overcome those sanctions by virtue of its strategic location and the diversity of its production sectors," the state agency said.

Syria's Arab neighbours Iraq, Lebanon and Jordan have all said they would not join a trade sanctions campaign.

In a reminder to outsiders of Syria's powerful, mainly Russian-supplied armed forces, state media showed top generals watching a live-fire exercise by missile units, mechanised brigades and aircraft, to test their capacity in "confronting any attack" on Syria.

Makdesi, the foreign ministry spokesman, said the war games were a "routine" exercise and not intended to send any message.

The first cracks appeared in one of the pillars of Assad's regime at the weekend with the desertion of some members of the secret police to the ranks of a rebel "free army".

At least a dozen members of the secret police deserted from the Airforce Intelligence complex in Idlib city, 280 km (175 miles) northwest of Damascus, triggering a gunfight with defectors in which 10 were killed or wounded on either side, activists said.

Opposition sources said a further 16 soldiers defected from units in Idlib on Sunday and a new group of defectors of similar size battled loyalist troops to the south, in the Josieh area on the border with Lebanon.

Assad's opponents estimate the strength of the rebel force at several thousands, mainly army recruits from Syria's Sunni Muslim majority. Members of Assad's minority Alawite sect, an offshoot of Shi'ite Islam, have a tight grip on the military and security apparatus.

SANA on Monday reported military funerals "with flowers and wreaths" for a further seven killed.