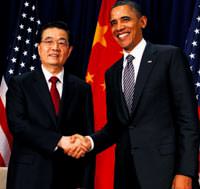 The United States has sought to reassure China that expanding military U.S. ties with Australia are not aimed at containing China, a U.S. defense official said on Thursday, a day after talks with the Chinese army.

President Barack Obama said on a trip to Asia last month the United States was "here to stay" and reached a deal to put a de facto U.S. military base in northern Australia.

China's military denounced the plan at the time, warning that it could erode trust and fan Cold War-era antagonism.

The talks on Wednesday, led by U.S. Under Secretary of Defense for Policy Michele Flournoy and the deputy chief of the People's Liberation Army General Staff, General Ma Xiaotian, went ahead despite those and other tensions, including U.S. arms sales to Taiwan in September.

Flournoy told reporters that Ma had asked about U.S. intentions behind the plan to put as many as 2,500 U.S. Marines as well as U.S. war planes and navy ships at a base in Darwin.

"We assured General Ma and his delegation that the U.S. does not seek to contain China. We do not view China as an adversary. That these posture changes were first and foremost about strengthening our alliance with Australia," she said at a briefing at the U.S. Embassy in Beijing.

Flournoy said the plan was about fostering bonds with an "incredibly steadfast ally".

"So, this really isn't about China. This is about Australia and ensuring that we remain present in the region in a way that is relevant to the kinds of, particularly non-traditional challenges that we face," she said.

Despite Washington's efforts to ease Beijing's worries, some in China suspect the United States is seizing an opportune moment to advance its own interests at China's expense.

China's military modernization and the growing reach of its navy are raising regional concerns that have fed into long-standing territorial disputes and risk speeding up military expansion across Asia.

U.S. allies such as Japan and South Korea have sought assurances from the United States that it would be a strong counterweight in the region.

China has repeatedly emphasized the defensive nature of its military and Foreign Ministry spokesman Hong Lei reiterated that pledge on the day of the talks, saying China "has not in the past, and it will not in the future, present a danger to any country".

In August, China made a trial launch of its first aircraft carrier, a retro-fitted Soviet vessel, and it has been building new submarines, surface ships and anti-ship ballistic missiles as part of its naval modernization.

China has had run-ins at sea with Japan, Vietnam and the Philippines in the past year. The incidents -- boat crashes and charges of territorial incursions -- have been minor, but the diplomatic reaction has often been heated.

In talks that she called "positive" and "very constructive", Flournoy said she had reiterated to China's military leaders that U.S. surveillance patrols near China's coast were routine.

"I assured the Chinese that we conduct these operations globally, literally in every region of the world, including near the coastlines of friends and allies," she said.

She said the two countries were hoping to reschedule in 2012 military exchanges and joint counter-piracy exercises in the Gulf of Aden that had been postponed in the wake of U.S. arms sales to Taiwan, a self-ruled island that China considers a breakaway province.