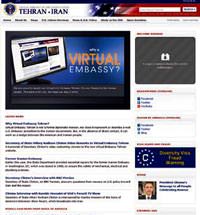 Iranian authorities blocked a website Wednesday hours after it was launched by the U.S. State Department to be a "virtual embassy" reaching out to people in the Islamic Republic.

"In accordance with the cybercrime law, access to this website is not possible," read a notice to anyone inside Iran trying to visit iran.usembassy.gov.

The semi-official Fars news agency commented on the blocking of the U.S. website, saying, "A decisive reaction by Iranian authorities has neutralized another sly plot by the Americans."

The "Virtual Embassy Tehran" website -- which makes clear it does not offer consular services -- is an attempt by Secretary of State Hillary Clinton to give Iranians a sympathetic view of the United States, which is referred to as "the Great Satan" by Tehran's ruling elite.

"Through this action, the Iranian government has once again demonstrated its commitment to build an electronic curtain of surveillance and censorship around its people," it said.

The United States has had no diplomatic relations with Iran since its embassy in Tehran was stormed in 1979 -- the year of the Islamic Revolution -- and its staff held hostage for 444 days.

Washington has since sought to isolate Iran, leading international sanctions against nuclear activities it believes are aimed at making the atom bomb -- a charge Tehran denies.

The website was launched one week after British diplomats fled Iran after their embassy was stormed by radical youths, bringing Tehran's relations with Europe to a new low.

Tehran blames the West for seeking to overthrow its Islamic system, and its control of the Internet aims to stop Iranians accessing foreign sites that offer views that do not concur with its own tightly controlled media.

Iranians will still be able to access the site by using a virtual private network, or VPN -- software that can subvert the government filter and is essential for the millions of Facebook users in the Islamic state.

The State Department said it believed Iranians would still have access to the website through VPNs or other means.

"We are fairly confident that we're able to recover from these kinds of temporary compromises of the site," State Department spokesman Mark Toner said, saying Tehran's move against the site "speaks volumes about their trust in their own citizens."