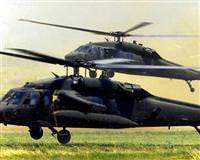 Two U.S. Army helicopters crashed on Monday during training exercises at a Washington state military base, killing four aviators on board, the base said in a statement.

Brendalyn Carpenter, a spokeswoman for Joint Base Lewis-McChord, confirmed that "there was an accident" in the evening and that military police and emergency personnel were en route to the accident scene at the base near Tacoma.

"Our thoughts and prayers go out to the family, friends and loved ones of the soldiers involved in this tragic accident," said Major General Lloyd Miles, acting senior Army commander at the base.

"We will conduct a thorough investigation into this incident, and we will do everything in our power to support the families of the brave soldiers who died this evening," he added.

The base identified the aircraft involved in the crash as a pair of OH-58 Kiowa observation helicopters. Local television station KIRO 7 reported that the helicopters had crashed in Thurston County in a wooded training area, and that there were no survivors.

Temperatures at the base were around the mid-20 degrees Fahrenheit on Monday evening, and local media reported a likelihood of fog in the woods where the crash was said to have occurred.