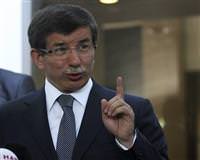 Iran's foreign minister has told Turkey that threats by Iranian political and military figures to strike Turkish missile defences if attacked do not represent official policy.

Ties between Turkey and Iran have been sorely tested by an uprising in Syria and Turkey's involvement in NATO's missile shield, which Tehran sees as a U.S. ploy to protect Israel.
Turkey's Foreign Minister Ahmet Davutoğlu telephoned his Iranian counterpart to express unease over recent threats to target Turkey if Iran comes under attack, Turkey's Foreign Ministry said in a statement on Twitter. "We have made the necessary warning to those who make irresponsible and senseless statements," Iranian Foreign Minister Ali Akbar Salehi stated. "The official view of the Islamic Republic of Iran towards Turkey is based on deep brotherhood and friendship," he said.
Last week, lawmaker Hossein Ibrahimi said Iran could target Turkey in a future conflict due to its hosting of the NATO defences that Iran fears could neuter the missiles it might use to hit Israel and U.S. forces in the region if attacked. "Targeting the missile defence shield on the Turkish territory would be a certain and natural reaction in the event of any threat emanating from that country," Ibrahimi was quoted as saying in the Dec. 8 edition of Sharq daily.
Turkey's Foreign Ministry, in its statement on Twitter, said Salehi told Davutoğlu such statement reflected "a personal view and was not in line with the government's position". A senior military official made similar comments last month.
Amir Ali Hajizadeh, head of the Revolutionary Guards' aerospace division, said: "We are ready to attack NATO's missile shield in Turkey if we face a threat," according to the semi-official Mehr news agency. Salehi told Davutoğlu only Iran's supreme leader, president and foreign minister could make official statements on Iran's foreign policy and that any other opinions were purely personal. The fact that Salehi has had to weigh in to calm matters points not only to tensions with Turkey but also to policy divisions within Iran's conservative ruling elite.