Bad batch of moonshine kills more than 100 in India 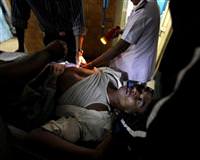 An adulterated batch of bootleg liquor has killed at least 100 drinkers in eastern India, with dozens more arriving at a cramped rural hospital with poisoning symptoms.

The deaths come just days after a hospital fire killed 93 people in the same state of West Bengal. Both disasters highlight lax health and safety standards as the nation of 1.2 billion people rapidly modernise.

"He drank the alcohol late in the afternoon yesterday...we didn't realise his health was deteriorating," Zamir Sardar said about his 32-year-old uncle Jahangir Sardar, a leather cutter, who passed away on Thursday.

"In the morning, his condition seemed very unusual, he cried out in pain. Then we brought him to the hospital as soon as we could, but he passed away within a couple of hours," he told Reuters on Thursday.

Half-conscious patients were carried into hospitals on stretchers, and treated on the floor due to lack of beds.

A hospital document seen by a Reuters witness listed 81 dead, while doctors at the hospital said the toll was climbing rapidly. The Press Trust of India news agency reported at least 107 had died.

Mass deaths from drinking moonshine are common in India, where the poor often drink "country liquor" which is cheaper than alcohol from licensed shops.