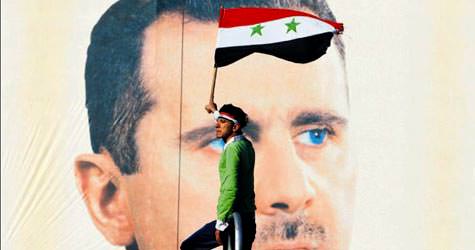 Syrian troops swept into the city of Hama to break a three-day strike by opponents of President Bashar al-Assad, killing at least 10 people but running into resistance from armed insurgents who destroyed two armoured vehicles, activists said.

Outside Hama, army deserters attacked a convoy of military jeeps, killing eight soldiers, they said, adding to a death toll of at least 30 people across the country on Wednesday.

The assault in Hama was the first armoured incursion there since a tank offensive in August crushed huge protests in the city. Activists said troops fired machineguns and ransacked and burnt shops which had closed to observe a mass, open-ended "Strike for Dignity" called by the opposition.

The United Nations says more than 5,000 people have died in Assad's crackdown on protests that erupted in the southern city of Deraa in March, inspired by Arab uprisings elsewhere.

"This cannot go on," United Nations Secretary-General Ban Ki-moon told reporters in New York. "In the name of humanity, it is time for the international community to act."

Assad, 46, whose family from the minority Alawite sect has held power in majority Sunni Muslim Syria for four decades, is facing the most serious challenge to his 11-year rule.

The demonstrations started with peaceful calls for reform but burgeoned into demands for Assad's overthrow. A growing armed insurgency has since raised the spectre of civil war.

The Syrian government says more than 1,100 members of the army, police and security services have been killed. State media reported military funerals on Wednesday for seven soldiers and police killed by "armed terrorist groups."

The United States and France, which blame Assad's forces for the violence, have urged the U.N. Security Council to respond to the mounting death toll.

The state news agency SANA quoted the visiting Iranian minister for urban development and roads, Ali Nikzad, as saying his country would stand by Syria "and support its economy and its stances facing the great conspiracy targeting it."

SANA said Nikzad's visit to Damascus followed the endorsement by Iran's parliament on Tuesday of a free trade agreement between the two countries.

Iranian economic support could be crucial for Syria as it faces sanctions from the United States, European Union, neighbouring Turkey and the Arab League. Syria's economy has already suffered a collapse in tourism and oil revenues, falling trade, a weakening currency and a halt in foreign investments.

Despite the worsening economic crisis and a growing number of army defections, mainly among Sunni conscripts, Assad still has the loyalty of most of the army. Unlike in Libya, the rebels have secured neither high-level defections from the military or government, nor do they fully control any territory.

Briefing the Security Council on Monday, U.N. human rights chief Navi Pillay said the 5,000 people killed in Syria include civilians, army defectors and those executed for refusing to shoot civilians, but not soldiers or security personnel killed by opposition forces.

Pillay said there were "alarming reports" of a military buildup around the city of Homs which could set the stage for an army assault on this centre of opposition to Assad.

In Washington, State Department spokeswoman Victoria Nuland said the United States had warned several times that this was a "matter of grave concern."

"We again call on the Syrian government to end the violence, to bring its tanks and armament back to barracks and to allow a real conversation in Damascus to move forward," she said.

"But our concern... is that's not the course that Assad is on and that's why he needs to go."

Turkey warned against all travel on the route between its Cilvegozu border gate in Hatay province and the city of Homs, after shots were fired at Turkish lorries travelling through Syria to and from important trade partners in the Gulf.

Turkish truck drivers also complain they are singled out for harassment by Syrian authorities due to Ankara's strong criticism of Assad's iron fist policy towards protests.

In Istanbul, Mohammad Bassam Imadi, Syria's former envoy to Sweden who resigned his post two years ago and left Syria earlier this month, said he would announce a group bringing together "the majority of the revolutionary groups in Syria."

"The main reason why I came out of Syria is to work for this new umbrella group which is going to give the political side of the revolution," he told Reuters Television.

The attack followed the death of five activists in a tank bombardment at dawn near the town of Mhardeh to the southeast. "It seems that a tank deliberately hit the car in which they were travelling," said an activist in the region who gave his name as Wael.

Violence spilled over into Lebanon on Wednesday when residents said Syrian soldiers crossed the frontier into the Bekaa Valley and fired at local shepherds, wounding two of them.

A media rights group said on Tuesday Syrian authorities had charged U.S.-born Syrian blogger Razan Ghazzawi, who was arrested as she tried to leave for Jordan last week, with seeking to incite sectarian strife.