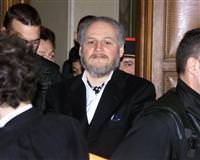 The Venezuelan defendant, 62, whose real name is Ilich Ramirez Sanchez, has been locked up in France for almost 20 years serving a life sentence in a separate case for killing two police officers and an informant in Paris in 1975.

Sentencing Ramirez to an additional life term, the special terrorism court in Paris made up of seven magistrates said he should serve a minimum of 18 years in jail.

The verdict could push back the date on which he can apply for conditional release, currently set for 2012.

Defense lawyers called the decision a scandal and said their client would file an appeal.

Ramirez was accused of masterminding four separate attacks in France on two trains, a train station and a Paris street that killed 11 people and wounded nearly 200.

Prosecutors said the bombings were his answer to the police seizure of two of his gang, including his lover, and had argued that he remained a danger to the public.

Earlier on Thursday, Ramirez - once one of the most wanted international criminals - addressed the court in a five-hour monologue, alternately rambling, vitriolic and poignant, calling himself a "living martyr" in defending his innocence.

Ramirez, a self-dubbed "elite gunman," appeared resigned to a guilty verdict. Death in prison, he said at one point, "is the role of a revolutionary."

"I am in prison ... condemned in a pre-decided case," he told the court, his voice rising in volume.

Ramirez, a colorful figure recognizable at the height of his fame by his Che Guevara-style beret, sunglasses and Havana cigars, sealed his notoriety in a bloody hostage-taking of OPEC oil ministers in 1975.

During the Cold War he received backing from Soviet bloc and Middle Eastern countries, staging attacks throughout Europe for more than two decades before being captured in Sudan in 1994.

During the six-week trial, Ramirez appeared more like a master of ceremonies than a defendant, talking over speakers, interrupting judges, correcting lawyers and occasionally beaming benevolently from his caged-in defendant's box.

He denied any specific involvement in the four bombings in 1982 and 1983 on a Paris street, two trains and a Marseille train station that wounded nearly 200 people and left 11 dead. Prosecutors say the bombings were Ramirez's answer to the police seizure of two of his gang, including his lover.

"There is nothing ... to connect me with these four attacks," he told the court, making a zero sign with his thumb and index finger.

Like a modern-day Scheherazade, Ramirez wove story after story, often smiling and waxing nostalgic about former comrades, and sometimes turning fiery to rail at the system.

His unrelenting discourse touched on a variety of topics, from prison life to Zionist strategy, Soviet passports, the French state, hashish and even the death penalty.

Ramirez broke down, his powerful voice wavering when, at the end of his speech, he read from what he said was the last will of fallen Libyan leader Muammar Gaddafi.

"I will continue the fight," he read from the text, before breaking off, overcome with emotion. A group of about a dozen youths in the courtroom audience raised their fists in the air, shouting encouragement at Ramirez.

"Salam Alaikum," or "Peace be with you," said Ramirez, who converted to Islam while in prison, before giving a final fist in the air to the crowd.

Accused of being a gun-for-hire by his opponents, and a cold-blooded killer by a former cohort turned witness against him, Ramirez introduced himself on the first day of the trial as "a revolutionary by profession."

Casting himself as a convenient scapegoat, he questioned why no one had ever been arrested in France for the attacks. He and his lawyers said the evidence in the case was based on unreliable witnesses and photocopies of documents from Eastern European secret service archives.

Clearly enjoying the limelight, Ramirez displayed a fondness for name-dropping, variously citing a cast of historical and modern-day heads of state from Venezuelan President Hugo Chavez and Soviet leader Stalin to former French president Jacques Chirac, mentioning the latter's guilty verdict given in the same courthouse earlier in the day.

He explained to the court the proper way to load a 9-millimeter pistol, correcting a prosecutor's knowledge of how many bullets such a gun holds.

"You really aren't a man of combat," he told him.

Prosecutors had argued Ramirez remains a public danger and demanded he be sentenced to an additional life term and serve a minimum of 18 years.