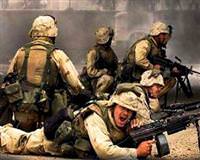 The last American forces pack up and leave Iraq before the end of the year, and are now in the final days of a costly, nearly nine-year military engagement.

-- Five U.S. combat brigades plus supporting troops, about 30,000 soldiers, are sent to Iraq between February and mid-June 2007. Besides reducing violence, Washington wanted to create a "breathing space" for Iraqi leaders to make progress on laws seen as critical to fostering national reconciliation.

November 17, 2008 - Iraq and the United States sign an accord requiring Washington to withdraw its forces by the end of 2011. The pact gives the government authority over the U.S. mission for the first time, replacing a U.N. Security Council mandate. Parliament approves pact after negotiations 10 days later.

February 27 - New U.S. President Barack Obama announces plan to end U.S. combat operations in Iraq by August 31, 2010, but says he will leave up to 50,000 troops to train Iraqi forces.

June 30 - All U.S. combat units withdraw from Iraq's urban centers and redeploy to bases outside.

August 31 - Troops levels in Iraq are reduced to 49,700 after a major draw down is completed.

May 3 - A "small, residual" U.S. force should remain in Iraq beyond the end of 2011, after the scheduled withdrawal, U.S. House Speaker John Boehner says.

June 6 - In the biggest single loss of life since 2009, six U.S. soldiers are killed in a rocket attack on a Baghdad base.

October 4 - Maliki wins support from political blocs on keeping U.S. troops as trainers, but they reject any deal that would grant U.S. troops immunity as Washington had requested.

October 21 - Obama says he will pull all U.S. troops out of Iraq at the end of 2011, dashing U.S. hopes of leaving a few thousand troops to buttress a still shaky Iraq, after the failure of negotiations on keeping some there as trainers.

December 2 - The U.S. military vacates Victory Base Complex, its vast main base near Baghdad airport that was once the hub of the American war operation.

December 12 - NATO says it will end its seven-year troop training mission in Iraq at the end of December, to coincide with the withdrawal of U.S. troops.