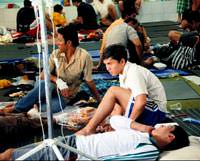 A boat carrying illegal immigrants heading for Australia sank off the coast of east Java in Indonesia and over 300 people were missing with many feared dead. There are Turks included in those missing.

Only 76 people of 380 people on board had been rescued, said Sahrul Arifin, the head of emergency and logistics at the East Java Disaster Mitigation Center.

He said strong waves wrecked the wooden boat about 90 km (56 miles) out to sea late Saturday night. "Our search and rescue team have begun sweeping the water around where the accident took place but we are now sending body bags to that area," Arifin said.

He said the passengers were mainly believed to be illegal migrants from countries including Iran and Afghanistan. Many boat people from the Middle East and Asia use Indonesia as a transit point en route to Australia.

Local TV showed images of more than a dozen shocked-looking survivors huddled in a clinic in Trenggalek, a town on Java island's southern coast.

Many economic migrants from the Middle East attempt to cross the Indian Ocean in boats in search of a better life in Australia.

Australia-based refugee advocate Jack Smit told Reuters first reports indicated the boat was overloaded. He suggested it might involve a new and inexperienced people-smuggling operator trying to make money quickly, as the boat reportedly left from the same port in Java as another that sank recently.

"It all points to new operators, and also the population of the boats is changing," Smit, of Project SafeCom Inc, told Reuters. "It seems to me it's a new operator that took a risk that was too big."

Smit said there appeared to be an increasing number of Iranians taking to the boats and fewer Afghans than previously. He estimated that 2 to 5 percent of thousands of asylum-seekers taking to boats in this way each year died en route, with many deaths not reported.

Asylum-seekers often pay thousands of dollars to board the boats, whose journeys are organized by people-smuggling networks based in Indonesia using ramshackle vessels often poorly equipped for the perilous journey to Australian waters. This sinking is the latest of several such disasters in recent years.