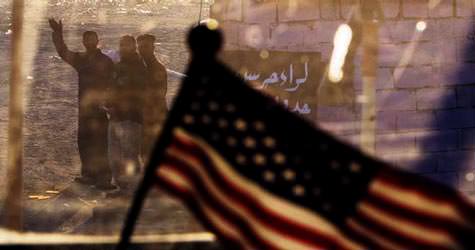 The last convoy of U.S. soldiers pulled out of Iraq on Sunday, ending nearly nine years of war that cost almost 4,500 American and tens of thousands of Iraqi lives, and left a country grappling with political uncertainty.

The war launched in March 2003 with missiles striking Baghdad to oust President Saddam Hussein closes with a fragile democracy still facing insurgents, sectarian tensions and the challenge of defining its place in an Arab region in turmoil.

The final column of around 100 mostly U.S. military MRAP armoured vehicles carrying 500 U.S. troops trundled across the southern Iraq desert from their last base through the night and daybreak along an empty highway to the Kuwaiti border.

Honking their horns, the last batch of around 25 American military trucks and tractor trailers carrying Bradley fighting vehicles crossed the border early on Sunday morning, their crews waving at fellow troops along the route.

"I just can't wait to call my wife and kids and let them know I am safe," Sgt. First Class Rodolfo Ruiz said as the border came into sight. Soon afterwards, he told his men the mission was over, "Hey guys, you made it."

For U.S. President Barack Obama, the military pullout is the fulfilment of an election promise to bring troops home from a conflict inherited from his predecessor, the most unpopular war since Vietnam and one that tainted America's standing worldwide.

For Iraqis, though, the U.S. departure brings a sense of sovereignty tempered by nagging fears their country may slide once again into the kind of sectarian violence that killed many thousands of people at its peak in 2006-2007.

The extent of those divisions was clear on Sunday when Maliki asked parliament for a vote of no confidence against Deputy Prime Minister Saleh al-Mutlaq, and security sources and lawmakers said an arrest warrant had been issued for Tareq al-Hashemi, one of Iraq's two vice presidents.

Hashemi and Mutlaq are Iraq's two most-senior Sunni politicians. The security sources said only intervention by Sunni and Shi'ite politicians had blocked Hashemi's arrest after he was linked to terrorism by four bodyguards.

The intensity of violence and suicide bombings has subsided. But a stubborn Sunni Islamist insurgency and rival Shi'ite militias remain a threat, carrying out almost daily attacks, often on Iraqi government and security officials.

Iraq says its forces can contain the violence but they lack capabilities in areas such as air defence and intelligence gathering. A deal for several thousand U.S. troops to stay on as trainers fell apart over the sensitive issue of legal immunity.

For many Iraqis, security remains a worry - but no more than jobs and getting access to power in a country whose national grid provides only a few hours of electricity a day despite vast oil potential.

U.S. and foreign companies are already helping Iraq develop the world's fourth-largest oil reserves, but its economy needs investment in all sectors, from hospitals to infrastructure.

"We don't think about America... We think about electricity, jobs, our oil, our daily problems," said Abbas Jaber, a government employee in Baghdad. "They (Americans) left chaos."

After Obama announced in October that troops would come home by the end of the year as scheduled, the number of U.S. military bases was whittled down quickly as hundreds of troops and trucks carrying equipment headed south to Kuwait.

U.S. forces, which had ended combat missions in 2010, paid $100,000 a month to tribal sheikhs to secure stretches of the highways leading south to reduce the risk of roadside bombings and attacks on the last convoys.

Only around 150 U.S. troops will remain in the country attached to a training and cooperation mission at the huge U.S. embassy on the banks of the Tigris river.

At COB Adder, as dusk fell before the departure of the last convoy, soldiers slapped barbecue sauce on slabs of ribs brought from Kuwait and laid them on grills beside hotdogs and sausages.

Earlier, 25 soldiers sat on folding chairs in front of two armoured vehicles watching a five-minute ceremony as their brigade's flags were packed up for the last time before loading up their possessions and lining up their trucks.

The last troops flicked on the lights studding their MRAP vehicles and stacked flak jackets and helmets in neat piles, ready for the final departure for Kuwait and then home.

"A good chunk of me is happy to leave. I spent 31 months in this country," said Sgt. Steven Schirmer, 25, after three tours of Iraq since 2007. "It almost seems I can have a life now, though I know I am probably going to Afghanistan in 2013. Once these wars end I wonder what I will end up doing."

Iran and Turkey, major investors in Iraq, will be watching with Gulf nations to see how their neighbour handles its sectarian and ethnic tensions, as the crisis in Syria threatens to spill over its borders.

The fall of Saddam allowed the long-suppressed Shi'ite majority to rise to power. The Shi'ite-led government has drawn the country closer to Iran and Syria's Bashar al-Assad, who is struggling to put down a nine-month-old uprising.

Iraq's Sunni minority is chafing under what it sees as the increasingly authoritarian control of Maliki's Shi'ite coalition. Some local leaders are already pushing mainly Sunni provinces to demand more autonomy from Baghdad.

The main Sunni-backed political bloc Iraqiya said on Saturday it was temporarily suspending its participation in the parliament to protest against what it said was Maliki's unwillingness to deliver on power-sharing.

A dispute between the semi-autonomous Kurdish region and Maliki's central government over oil and territory is also brewing, and is a potential flashpoint after the buffer of the American military presence is gone.