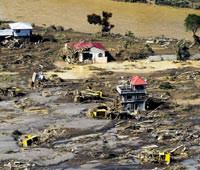 Disaster agencies on Monday delivered body bags, food, water, and medicine to crowded evacuation centres in the southern Philippines as officials ordered the digging of graves to prevent disease after hundreds died from flash floods.

The national disaster agency said 684 died after Typhoon Washi slammed ashore in Mindanao island while residents slept at the weekend, sending torrents of water and mud through riverside villages and sweeping houses out to sea.

The Philippine National Red Cross put the toll at 652 killed and more than 800 missing. The casualties far exceeded the 464 people killed in 2009 when a tropical storm dumped heavy rain on the main Luzon island, inundating nearly the entire capital Manila.

Officials in Iligan said they would bury about 80 bodies at a public cemetery on Monday -- but in individual plots and tombs. Workers were rushing to construct tombs.

"Definitely, we are not burying them in mass graves. That is not allowed any more," Levi Villarin, city health officer, told Reuters.

In Cagayan de Oro, further east along Mindanao's north coast, officials moved hundreds of unclaimed bodies to a sanitary landfill for a mass burial after residents complained of the stench.

"They (local officials) have to bury these decomposing bodies because they could no longer be recognised and they're avoiding a potential outbreak of disease," Ramos said.

Vicente Emano, mayor of Cagayan de Oro, said officials were planning to put some bodies into refrigerated trucks until law enforcement agencies identify the dead through fingerprints and DNA tests.

President Benigno Aquino is due to visit the two cities on Tuesday.

The cities are running out both room at evacuations centres and coffins. The Health department was sending 600 body bags and medicines to the affected areas, Social Work Secretary Dinky Soliman said.

The Maoist-led Communist Party of the Philippines (CPP) rebels, which have battled government forces for 40 years, said they had declared a six-day unilateral Christmas truce to help those affected by the floods. The government last week announced a 19-day truce.

The government said nearly 143,000 people were affected by the flash floods and landslides, of which 45,000 people were staying in evacuation centres. The rest stayed with relatives.

Save the Children, a London-based non-government organisation, estimated more than half of those affected were children.

A Reuters photographer saw three white wooden coffins of children 7 to 10 years old lined up at a church in Iligan converted into an evacuation centre.

Ramos, head of the national disaster agency, said six helicopters and two dozen boats were dispatched to search for survivors and drowning victims.

"From the helicopter, we saw four major river systems, all houses along the riverbanks were totally destroyed," he said.

Some bodies were found on the shore of Camiguin island, 77 kms (47 miles) from Cagayan de Oro.

Rescuers pulled the bodies of at least 13 people from a two-storey concrete house in Iligan flattened by huge logs that fell from the mountains. They fear more bodies lay under the debris as many residents sought safety there, thinking the house could withstand the flash floods.

Disaster officials said the United Nations Office for the Coordination of Humanitarian Affairs had started a damage and needs assessment survey to help the government and aid agencies respond to the disaster.

Foreign governments have sent condolences and promised to donate food and other relief supplies.

The Agriculture department said about 8.1 million pesos ($184,000) in mostly rice and corn crops were lost.

Mindanao island, the southernmost in the Philippines, is a mineral-rich region not normally in the path of the average 20 typhoons that hit the Southeast Asian country each year.