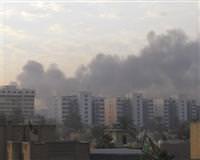 A rash of bombings hit Baghdad on Thursday, killing at least 57 people in the first big attack on Iraq's capital since a crisis between its Shi'ite Muslim-led government and Sunni rivals erupted days after the U.S. troop withdrawal.

At least 18 people were killed when a suicide bomber driving an ambulance detonated the vehicle near a government office in the Karrada district, sending up a dust cloud and scattering car parts into a kindergarten, police and health officials said.

"We heard the sound of a car driving, then car brakes, then a huge explosion, all our windows and doors are blown out, black smoke filled our apartment," said Maysoun Kamal, who lives in a Karrada compound.

In total at least 57 people were killed and 179 were wounded in more than ten explosions in Baghdad, an Iraqi health ministry spokesman said.

More bombs ripped into the central Alawi area, Shaab and Shula in the north, all mainly Shi'ite areas, and a roadside bomb killed one and wounded five near the Sunni neighbourhood of Adhamiya, police said.

Violence in Iraq has ebbed since the height of sectarian violence in 2006-2007, when suicide bombers and hit squads targeted Sunni and Shi'ite communities in attacks that killed thousands of people.

U.S. TROOPS OUT ONLY DAYS AGO

The last few thousand American troops pulled out of Iraq over the weekend, nearly nine years after the invasion that toppled Sunni dictator Saddam Hussein. Many Iraqis had said they feared a return to sectarian violence without a U.S. military buffer.

Just days after the withdrawal, Iraq's fragile power-sharing government is grappling with its worst turmoil since its formation a year ago. Shi'ite, Sunni and Kurdish blocs share out government posts in a unwieldy system that has been impaired by political infighting since it began.

Maliki this week sought the arrest of Sunni Vice President Tareq al-Hashemi on charges he organised assassinations and bombings, and he asked parliament to fire his Sunni deputy Saleh al-Mutlaq after he likened Maliki to Saddam.

The moves against the senior Sunni leaders are stirring sectarian tensions because Sunnis fear the prime minister wants to consolidate Shi'ite control.

Iraq's Sunni minority have felt marginalised since the rise of the Shi'ite majority in Iraq after the 2003 invasion. Many Sunnis feel they have been shunted aside in the power-sharing agreement that Washington touts as a young democracy.

Thursday's attacks represented the first major assault in Baghdad since November when three bombs exploded in a commercial district and another blast hit the city's western outskirts on Saturday, killing at least 13 people.

In October, bomb attacks on a busy commercial street in northeastern Baghdad killed at least 30, with scores wounded.