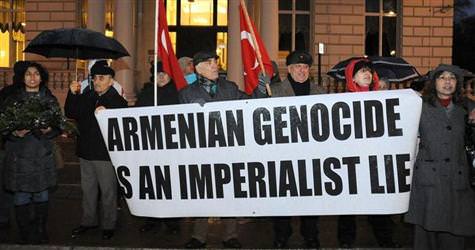 France took the first step on Thursday to criminalizing the denial of the supposed 1915 mass killing of Armenians by Ottoman Turks, a move that risks damaging Paris' diplomatic and commercial relations with Ankara.

Tension has risen in the last week over the draft law put forward by members of President Nicolas Sarkozy's party with Turkish Prime Minister Tayyip Erdoğan warning Sarkozy there would be grave consequences if the bill passes.
Lawmakers in the National Assembly - the lower house of parliament - voted overwhelmingly in favor of the bill, which will now be debated next year in the Senate.
It could still face a long passage into law, though its backers want to see it completed before parliament is suspended at the end of February ahead of elections in the second quarter.
Lower House President Bernard Accoyer said on Wednesday he doubted the bill would pass by the end of parliament as the government had not made the bill priority legislation.
TURKISH ANGER, FRENCH ELECTIONS
The French government has stressed that the bill, which mandates a 45,000-euro fine and a year in jail for offenders, is not its own initiative and pointed out that Turkey cannot impose unilateral trade sanctions.
Faced with Sarkozy's open hostility to Turkey's stagnant bid to join the European Union, and buoyed by a fast-growing economy, Ankara has little to lose by picking a political fight with Paris.
With Turkey taking an increasingly pivotal and influential role in the Middle East, especially over Syria, Iran and Libya, France could experience some diplomatic discomfort, and French firms could lose out on lucrative Turkish contracts.
France is Turkey's fifth biggest export market and the sixth biggest source of its imports.
Ankara considers the bill, originally proposed by 40 deputies from Sarkozy's party, a blatant attempt at winning the votes of 500,000 ethnic Armenians in France in next year's elections, and believes that it limits freedom of speech and represents an unnecessary meddling by politicians in a business best left to historians.