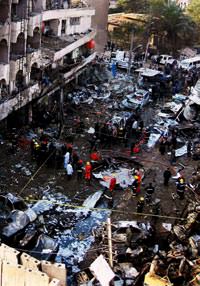 A wave of bombings killed at least 72 people in Baghdad Thursday, the first attacks since Iraq's Shi'ite-led government was engulfed in a crisis that risks fracturing the country along sectarian and ethnic lines.

The bombings, just days after the last U.S. troops left Iraq, marked a violent backlash against Shi'ite Prime Minister Nuri al-Maliki's move to sideline two Sunni rivals. The tensions threaten a relapse into the kind of sectarian bloodletting that drove Iraq to the brink of civil war a few years ago.

At least 18 people were killed when a suicide bomber driving an ambulance detonated the vehicle near a government office in Baghdad's mostly Shi'ite Karrada district, sending up a huge smoke cloud and scattering car parts into a kindergarten, according to police and health officials.

"We heard the sound of a car driving, then car brakes, then a huge explosion. All our windows and doors are blown out, black smoke filled our apartment," said Maysoun Kamal, who lives in a Karrada compound.

Police and security sources said there were more than 10 explosions across Baghdad, mostly targeting Shi'ite districts. A total of 217 people were wounded.

Iraqi officials linked the attacks to the current crisis.

"The timing of these crimes and the places where they were carried out confirm ... the political nature of the targets," Maliki said in a statement.

A senior U.S. official however said Washington's initial assessment was that the violence was probably the work of al Qaeda.

"It has all the marks of al Qaeda, targeting large concentrations of civilians and it could be that they are trying to exploit this by seeking to recreate the support that they had in the west and the north of the country," the official said, speaking on condition of anonymity.

The United States "stands with Iraq as a strategic partner and a close friend," the White House said. "Attempts such as this to derail Iraq's continued progress will fail."

The last American troops left OPEC oil-producer Iraq over the weekend, nearly nine years after the invasion that toppled Sunni dictator Saddam Hussein. Many Iraqis had said they feared a return to sectarian violence without a U.S. military buffer.

Upheaval in Iraq would have wider consequences in a region where a crisis in neighboring Syria is taking on a more sectarian tone, and Shi'ite Iran, Turkey and Sunni Arab Gulf nations are jostling for influence.

More bombs ripped into the central Alawi area, Shaab and Shula in the north, all mainly Shi'ite areas, and a roadside bomb killed one and wounded five near the Sunni neighborhood of Adhamiya, police said.
An old woman wrapped in black yelled and called out for her husband, lost under the rubble, after two bombs struck a wholesale vegetable market where they both worked.

Further explosions struck the southwestern part of the capital late Thursday, including a roadside bomb followed by a car bomb in the Al-Shurta al-Khamissa district and a parked car bomb in the Jihad area, police said.

Violence in Iraq has ebbed since the height of sectarian slaughter in 2006-2007, when suicide bombers and hit squads targeted Sunni and Shi'ite communities in continual attacks.

But the country is still fighting a stubborn, lower-grade insurgency waged by Sunni Islamists tied to al Qaeda and Shi'ite militias who U.S. officials say are backed by Iran.

No group claimed responsibility for Thursday's bombings, but analysts said Iraq's al Qaeda affiliate was probably hitting Shi'ite targets, as in the past, to inflame sectarian conflict and show it was still capable of major attacks.

Just days after the U.S. withdrawal, Iraq's fragile power-sharing government is grappling with its worst turmoil since its formation a year ago. Shi'ite, Sunni and Kurdish blocs share out government posts in a unwieldy system that has been impaired by political infighting since it began.
Since its modern borders were mapped in 1920, Iraq has been a patchwork of sectarian and ethnic regions, from the mainly Shi'ite Muslim south to Sunni strongholds in the west and, more recently, the semi-autonomous Kurdistan region in the north.

Even before the crisis, Baghdad and Kurdistan were caught up in a growing dispute over control of some of the world's fourth-largest oil reserves. One dispute involves whether U.S. oil giant Exxon Mobil can operate in Kurdistan.

Sunni Muslim provinces near Saudi Arabia are also chafing against what they see as an increasingly authoritarian government in Baghdad that is interested only in promoting a Shi'ite Muslim agenda.

This week, Maliki called for the arrest of Sunni Vice President Tareq al-Hashemi on charges he organized assassinations and bombings, and he asked parliament to fire his Sunni deputy Saleh al-Mutlaq after he likened Maliki to Saddam.

Hashemi, who has denied the accusations, has taken refuge in Iraq's Kurdish region where he is unlikely to be handed over to the Shi'ite-led government in Baghdad.

Maliki Wednesday warned Sunni leaders they would be excluded from power if they walked out of the ruling coalition, even as senior U.S. officials piled pressure on both sides for dialogue to end the crisis.

The moves against the senior Sunni leaders have fanned sectarian worries because Sunnis fear the prime minister wants to consolidate Shi'ite domination over the country.

Iraq's Sunni minority have felt marginalized since the rise of the Shi'ite majority in Iraq after the 2003 invasion. Many Sunnis feel they have been shunted aside in the power-sharing agreement that Washington touts as a young democracy.