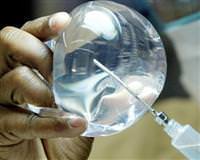 The founder of a French firm at the centre of a global breast implants scare is wanted by Costa Rica, according to a notice posted on the website of the international police agency Interpol.

Jean-Claude Mas, who started the now defunct Poly Implant Prothese (PIP) in 1991, has disappeared from public view as anxiety about the potential health effects of his implant products has spread around the globe.

A "red notice" posted by Interpol says the 72-year-old is wanted for "life and health" offences by Costa Rica. It shows two police mugshot pictures of the bald and bearded man smiling in a white sports shirt and glasses.

The small company, which shut its doors in 2010 after its implants were ordered off the market, has been thrust into the spotlight after the French government recommended that tens of thousands of women in France with PIP implants have them removed by their surgeons as a precaution.

The implants have been found to have had abnormal rupture rates, although the French government and public health experts said on Friday there was no evidence of increased cancer risk in PIP implants versus other brands.

Up to 90 percent of PIP's sales went abroad, mostly to Latin America and Western Europe.

Officials at Lyon-based Interpol were not immediately available to give further details or say when the alert, which requests member states to arrest him, was made.

The lawyer for the company told Reuters earlier on Friday that neither Mas nor the company's chief financial officer Claude Couty had fled to South America or Luxembourg.

"They are and will stay in the Var region (of France)," Yves Haddad said, adding that his client would not publicly comment on the affair. Haddad said silence was out of "decency and discretion."

Very little is known about Mas, the chief executive and founder of the firm.

Its factory, which French media say is still owned by his former partner, is based in Seyne-Sur-Mer, a grim industrial zone in the outskirts of the southern French city of Toulon.

One of the few photos of him show an ageing man with close-cropped white hair and goatee cupping an opaque implant in his hand, in a warehouse beside stacks of white boxes labeled PIP.

Another shows him standing at the window of a laboratory room, dressed in a white lab coat, his brow furrowed as he gestures towards his plant's equipment.

Patrick Baraf, a plastic surgeon in Paris who says he first met Mas in 1981 but never used his implants because of concern over their low prices, told Reuters on Thursday Mas was a former butcher who sought to corner the lucrative cosmetic surgery market.

"He was not from a medical background. He was not a medical engineer. He was a butcher, selling ham and sausage, before he started this line of work, which ... doesn't mean you are qualified to manufacture breast implants," Baraf said.

PIP, once the third largest producer in its field, sold about 300,000 implants worldwide before closing its doors. The implants are used in cosmetic surgery to enhance breast size or replace lost breast tissue after mastectomies.

Financial documents filed by its Delaware-based holding company, Heritage Worldwide Inc. showed that Mas received a salary of $359,244 in 2008 and was paid 72,900 euros in 2002. He had been a director of Heritage since March 2003.

He was briefly questioned by police in November 2010, but released without charge.