Tens of thousands of protesters pile pressure on Putin 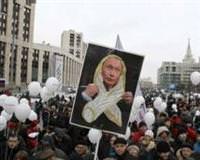 Tens of thousands of flag-waving and chanting protesters called on Saturday for a disputed parliamentary election to be rerun and an end to Vladimir Putin's rule, increasing pressure on the Russian leader as he tries to win back the presidency.

The protesters shouted "Russia without Putin" and "New elections, New elections" as one speaker after another called for an end to Putin's 12-year domination of the country at the second big opposition rally in two weeks in central Moscow.

"Do you want Putin to return to the presidency?" novelist Boris Akunin asked from a large stage. Whistling and jeering, protesters chanted: "No!"

Witnesses said at least as many people turned out as at the last big Moscow rally on December 10 to protest against alleged vote-rigging in the December 4 election won by Putin's United Russia.

Police said at least 28,000 attended the rally on Prospekt Sakharova (Sakharov Avenue), named after Soviet-era dissident Andrei Sakharov. But one of the organizers, liberal politician Vladimir Ryzhkov, put the crowd size at 120,000 people and some climbed lamp-posts or trees to get a better view.

The big turnout is likely to encourage organizers to believe they can keep up the momentum of the biggest opposition demonstrations since Putin rose to power in 1999, although the prime minister seems intent on riding out the protests.

"I see enough people to take the Kremlin and the White House (government headquarters) right now!" anti-corruption blogger Alexei Navalny, who has emerged as the most inspirational of the opposition leaders, said to loud cheers.

"But we are a peaceful force, we won't do it - yet! But if the crooks and thieves continue trying to deceive us and lie to us, we will take (power) ourselves. It is ours!"

The protesters were heartened on Saturday by the Kremlin's human rights council saying a new election should be held, although it is only an advisory body whose recommendations are regularly ignored by Russia's leaders.

Many of the protesters wore white ribbons, the symbol of the protests, and others carried balloons and flags at the rally, which brought together liberals, nationalists, anarchists, environmentalists and urban youth on a bitterly cold day.

"The last protest made a huge impression and I want others to come and realize they can stand up for their right. We all know the election results and we all know how dishonest they were," said Andrei Chernyshov, a 22-year-old student.

President Dmitry Medvedev, who is stepping aside for Putin to return to the Kremlin after four years as prime minister, has promised electoral reforms to relax the Kremlin's grip on power.

But the opposition has rejected these conciliatory efforts and says Putin and Medvedev have ignored its key demand for a rerun of the poll, in which United Russia won a slim majority.

The protesters say United Russia benefited from widespread voting irregularities and international monitors said the vote was slanted in the ruling party's favor.

"The party of swindlers and thieves are the only ones who benefit from the preservation of the status quo," journalist Leonid Parfyonov said on a video message shown on a screen.

Others waved condoms blown up like balloons, mocking Putin for saying earlier this month that he had initially mistaken the protesters' white ribbons, pinned to their chests, for condoms.

One protester carried a poster showing a doctored portrait of Putin with a condom wrapped around his head.

Dozens of police trucks lined the city's main ring road nearby and the police blocked off roads around the protest site, but they did not intervene.

There was no immediate reaction to the protests from Putin but state and other tightly controlled television channels provided coverage of the rally, without any direct mention of the criticism of the 59-year-old prime minister.

PUTIN OUT OF TOUCH?

Putin is still expected to win the presidential election in March and return to the post he held from 2000 until 2008 - the opposition is divided, has no candidate to unite it and may struggle to keep protests going in mid-winter and through the looming New Year holiday lasting about 10 days.

But there are growing doubts that Putin will win outright in the first round of voting. Many Russians say he is out of touch and some sources close to Russia's leadership suggest he has not grasped the seriousness of the protests.

The popularity of the former KGB spy, who has remained Russia's paramount leader, has dropped since he and Medvedev announced plans in September to swap jobs next year.

Many Russians said this showed a disregard for democracy and, although some still admire Putin for restoring order after the chaos that followed the Soviet Union's collapse, others fear his return would bring political and economic stagnation.

Putin has also alienated many people by suggesting that a large number of people at the protests, which were mainly organized on social networking sites, were paid to turn up and accused the United States of encouraging them.

"I didn't go to the first demonstration. I didn't think it was worth it. But seeing the news I realized how angry I was that my vote had been stolen," said Mikhail, a 46-year-old real estate salesman who declined to give his full name.