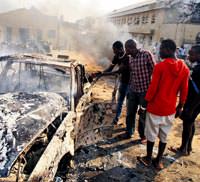 The Boko Haram terrorist organization set off bombs across Nigeria on Christmas Day - three targeting churches including one that killed at least 27 people - raising fears that they are trying to ignite sectarian civil war.

The Boko Haram terrorist organization, which aims to impose sharia law across the country, claimed responsibility for the three church bombs, the second Christmas in a row the group has caused mass carnage with deadly bombings of churches. Security forces also blamed the sect for two other blasts in the north.

St Theresa's Catholic Church in Madala, a satellite town about 40 km (25 miles) from the center of the capital Abuja, was packed when the bomb exploded just outside.

"We were in the church with my family when we heard the explosion. I just ran out," Timothy Onyekwere told Reuters. "Now I don't even know where my children or my wife are. I don't know how many were killed but there were many dead."

Hours after the first bomb, blasts were reported at the Mountain of Fire and Miracles Church in the central, ethnically and religiously mixed town of Jos, and at a church in northern Yobe state at the town of Gadaka. Residents said many were wounded in Gadaka, but there were no immediate further details.

A suicide bomber killed four security officials at the State Security Service in one of the other bombs, which struck the northeastern town of Damaturu, police said. Residents heard two loud explosions and gunfire in the town.

A Reuters reporter at the church near Abuja saw the front roof had been destroyed, as had several houses nearby. Five burnt out cars were still smouldering. There were scenes of chaos, as shocked residents stared at the wreckage in disbelief.

"Mass just ended and people were rushing out of the church and suddenly I heard a loud sound: 'Gbam!' Cars were in flames and bodies littered everywhere," Nnana Nwachukwu told Reuters.

Father Christopher Barde, Assistant priest of the church, said: "The officials who counted told me they have picked up 27 bodies so far."

Police cordoned off the area around the church. Thousands of furious youths set up burning road blocks on the highway from Abuja leading to Nigeria's largely Muslim north.

Police and the military tried to disperse them by firing live rounds into the air with tear gas.

"We are so angry," shouted Kingsley Ukpabi, as a queue of hooting vehicles lined up behind his flaming barrage.

Boko Haram - which in the Hausa language spoken in northern Nigeria means "Western education is sinful" - is loosely modelled on the Taliban movement in Afghanistan.

It has emerged as the biggest security threat in Nigeria, a country of 160 million split evenly between Christians and Muslims, who for the most part live side by side in peace.

Its low level insurgency used to be largely confined to northeastern Nigeria, but it has struck several parts of the north, center and the capital Abuja this year.

Last Christmas Eve, a series of bomb blasts around Jos killed 32 people, and other people died in attacks on two churches in the northeast.

At the church near Abuja, a wounded man whose legs were almost shattered to pieces by the blast was loaded onto a stretcher near an ambulance by security services.

"I'll survive," he said in a hushed voice.

The blast in Jos, a tinderbox of ethnic and sectarian tensions that sometimes sees deadly clashes between Muslims and Christians, was accompanied by a shooting spree by militants, who exchanged fire with local police, said Charles Ezeocha, special taskforce spokesman for Jos.

"We lost one policeman and we have made four arrests. I think we can use them to get more information and work on that," he said. Police found four other explosive devices in Jos, which they deactivated, he added.

President Goodluck Jonathan, a Christian from the south who is struggling to contain the threat of Islamist militancy, called the incidents "unfortunate" but said Boko Haram would "not be (around) forever. It will end one day."

The White House condemned "this senseless violence and tragic loss of life on Christmas Day."

U.N. Secretary-General Ban Ki-moon also condemned the attacks and expressed his condolences "to the people of Nigeria and to the bereaved families."

"The Secretary-General calls once again for an end to all acts of sectarian violence in the country and reiterates his firm conviction that no objective sought can justify this resort to violence," a statement released by his office said.