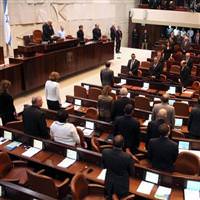 Israeli lawmakers debated on Monday recognizing the 1915 mass killing of Armenians by Ottoman Turks as “so-called genocide” but were warned by the Foreign Ministry about further damage to frayed relations with Turkey.

The issue has stirred deep emotions in Israel, where some legislators have said the Jewish people, who suffered six million dead in the Nazi Holocaust, have a moral obligation to identify with the Armenian tragedy, even at the risk of a Turkish backlash. No decision was taken by parliament's Education and Culture Committee, which said it would hold another session at a future date.
"I can say that at this time, recognition of this type can have very grave strategic implications," said Irit Lillian, a Foreign Ministry official who addressed the forum. "Our relations with Turkey today are so fragile and so delicate that there is no place to take them over the red line, where we have been, I'm sorry to say, for many months," she said.
Ties between the two former strategic allies were strained by Israel's killing of nine Turks in a commando raid on a Gaza-bound ship in 2010. Turkey withdrew its ambassador to Israel after the incident and suspended military cooperation. Israel said its marines acted in self-defense after an initial boarding party was attacked.
Zahava Gal-On, a lawmaker from the left-wing Meretz party, said Israeli governments have refused to define the 1915 killings according to Armenian claims "for cynical, strategic and economic, reasons, connected to ties with Turkey". Israel, she said, has a "moral and historical obligation to recognise the (allegations) of the Armenian people" and ensure the subject is taught comprehensively in its schools.
The committee session was the first public parliamentary hearing on the issue. Last week, Turkey cancelled all economic, political and military meetings with its NATO partner France after the French National Assembly voted overwhelmingly in favour of a draft law outlawing the denial of Armenian claims.
Ankara argues that there was heavy loss of life on both sides during fighting in the area.