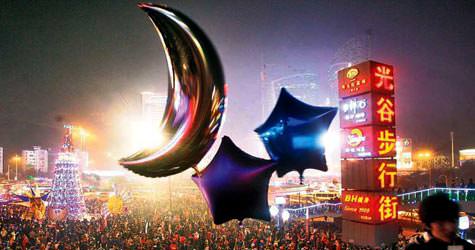 Pope Benedict ushered in Christmas for the world's 1.3 billion Roman Catholics on Saturday, urging humanity to see through the superficial glitter and commercialism of the season and rediscover the real significance of the humble birth of Jesus.

The 84-year-old pope, celebrating the seventh Christmas season of his pontificate, also urged that those marking the holiday in poverty, suffering or far from home not be forgotten.

At the start of a Christmas Eve service, he was wheeled up the central aisle of St Peter's Basilica standing on a mobile platform which he has been using since October.

The Vatican says it is to conserve his strength, allow more people to see him and guard against attacks such as one on Christmas Eve, 2009, when a woman lunged at him and knocked him to the ground. He is believed to suffer from arthritis in the legs.

But he seemed to be in good shape during the solemn service in Christendom's largest church as choirs sang, cantors chanted and organ music filled the centuries-old basilica.

Benedict, wearing resplendent gold and white vestments, urged his listeners to find peace in the symbol of the powerless Christ child in a world continually threatened by violence.

"Today Christmas has become a commercial celebration, whose bright lights hide the mystery of God's humility, which in turn calls us to humility and simplicity," he said in his homily to about 10,000 people in the basilica and millions more watching on television throughout the world.

"Let us ask the Lord to help us see through the superficial glitter of this season, and to discover behind it the child in the stable in Bethlehem, so as to find true joy and true light."

The Christmas story of how Jesus, who Christians believe is the son of God, was born powerless "in the poverty of the stable" should remind everyone of the need for humility.

"... let us strip away our fixation on what is material, on what can be measured and grasped. Let us allow ourselves to be made simple by the God who reveals himself to the simple of heart," he said.

The pope, who earlier placed a "candle of peace" on the windowsill of his apartments as the life-size nativity scene in St Peter's Square was inaugurated, called for an end to violence, for oppressors to put down their "rods" and for all to become peacemakers.

"God has appeared - as a child. It is in this guise that he pits himself against all violence and brings a message that is peace," he said.

"At this hour, when the world is continually threatened by violence in so many places and in so many different ways, when over and over again there are oppressors' rods and bloodstained cloaks, we cry out to the Lord..." he said.

"...we suffer from the continuing presence of violence in the world, and so we also ask you: manifest your power, O God. In this time of ours, in this world of ours, cause the oppressors' rods, the cloaks rolled in blood and the footgear of battle to be burned, so that your peace may triumph in this world of ours."

Those celebrating Christmas in comfortable circumstances should remember those less fortunate.

"And let us also pray especially at this hour for all who have to celebrate Christmas in poverty, in suffering, as migrants, that a ray of God's kindness may shine upon them, that they - and we - may be touched by the kindness that God chose to bring into the world through the birth of his Son in a stable," he said.

On Christmas Day, the pope will deliver his twice-yearly "Urbi et Orbi" (to the city and the world) message and blessing from the central loge of St Peter's Basilica.

He continues his Christmas and New Year's celebrations on Dec 31 with a year-end Mass of thanksgiving known by its Latin name Te Deum.