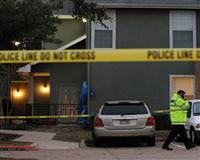 Police in Texas found the bodies of seven people in a Dallas-area apartment on Sunday, all shot to death and surrounded by newly unwrapped Christmas presents, authorities said.

Police in the town of Grapevine said the dead included four women and three men, one of them the apparent gunman in what investigators believe was a murder-suicide, and that all appeared to be members of the same family.

Two handguns were recovered from the apartment, said Sergeant Robert Eberling of the Grapevine police department, who called it a "gruesome crime scene" and the worst massacre in that town's history.

A community of about 46,000 people some 20 miles northwest of central Dallas, Grapevine is known for its wine-tasting salons and was recently proclaimed by the state Senate as the "Christmas Capital of Texas" for its abundance of annual holiday-season events.

"This is obviously a terrible tragedy," Mayor William Tate said in a statement given to Reuters. "The fact that it happened on Christmas makes it even more tragic. This appears to be a family situation and anyone who has a family will be incredibly saddened by that happened."

Police responding to a 911 emergency call at around 11:30 a.m. local time found the bodies in the first-floor living room of a two-story unit in the Lincoln Vineyards apartments, police said. No one reported hearing any gunshots.

The 911 caller never spoke to police, and officers did not see the telephone when they went into the home. Eberling said he believed police had to kick in the door to enter.

The circumstances of the shooting remained unclear. However, the victims appeared to have been opening Christmas gifts when the shooting occurred, and there was no visible sign of forced entry or a struggle, police said.

"By all appearances, they're all part of the same family," Eberling said, adding that the victims were believed to have been "celebrating Christmas" when the shooting unfolded.

"It's a gruesome crime scene to say the least, with that many victims in that area suffering gunshot wounds," he said.

Two of the dead were believed to be in their 50s or 60s, while the others appeared to be young adults, about 18 to 20, according to police.

Authorities did not immediately identify the victims and did not speculate on a possible motive for the shooting.

Police said there were no survivors at the apartment when they arrived. Eberling said none had been dead for very long.

As of 7:30 p.m., about eight hours after they were found, all seven bodies remained in the apartment, and investigators were expected to continue processing the crime scene late into the night, Eberling said.

Lincoln Vineyards is a middle-income complex near Colleyville Heritage High School, one of the area's most highly regarded schools.

Several neighbors told Reuters that children frequently played in front of the apartment, and they regularly saw young adults leaving for work. They added that they did not know the residents personally.

Several apartment residents stood outside, visibly shaken, and one of them crying, while investigators gathered evidence from the crime scene.

Vanessa Barerra said the killings were especially disturbing in light of Grapevine's reputation as a place to live.

"I did research and chose to live here because of the safety and the school district," she said. "I'm glad my kids weren't here. They're with their dad."