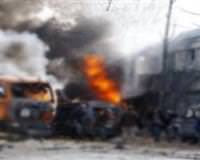 At least seven people were killed when a suicide car bomber hit Iraq's interior ministry on Monday in the latest attack since a crisis erupted between the Shi'ite-led government and Sunni leaders a week ago.

The blast occurred when the bomber drove his vehicle into a security cordon outside the ministry in central Baghdad, detonating an explosion that left dead and wounded on the ground and set fire to nearby vehicles, police said.

A senior police source said authorities believed insurgents were targeting the interior ministry because of the announcement of the arrest warrant for Sunni Vice President Tareq al-Hashemi, charged with running death squads.

Taped confessions of suspects the ministry said were Hashemi's bodyguards were aired on state-run Iraqiya television and other local media Monday and linked the vice president to killings and attacks on Iraqi government and security officials.

The attack on Bab al-Sharji street followed a wave of explosions Thursday, including one suicide car bomb and multiple roadside bombs, in mainly Shi'ite areas across the capital in which at least 72 people were killed.

"When I went outside I found my colleagues, some of them were killed, others were on the ground, many cars were burned, the policeman on the watchtower looked like he was killed when he was hit in the head," Zaid Raheem, a police guard, said.
The ministry said in a statement that a suicide car bomber had attacked the entrance to its headquarters and killed 3 people and wounded 33.

Hashemi has left Baghdad for semi-autonomous Iraqi Kurdistan, where he is unlikely to be handed over to central government officials immediately.

The turmoil threatens to scuttle an uneasy power-sharing government that splits posts among the Shi'ite National Alliance coalition, the mostly Sunni-backed Iraqiya bloc and the Kurdish political movement.

A weekly cabinet meeting, expected Tuesday, is seen as the key test for how the crisis develops, and tensions could rise further if government ministers from Iraqiya decide to boycott the meeting.

Iraqiya lawmakers have already suspended their participation in parliament, which is in recess, though a statement from the party Sunday said it was willing to take part in talks to try to solve the crisis.

Maliki has warned Hashemi's Iraqiya bloc they face exclusion from power if they walk out on his ruling coalition.

The Sunni minority have felt marginalised since the rise of the Shi'ite majority after the 2003 U.S.-led invasion that toppled Sunni dictator Saddam Hussein, and many Sunnis feel the political deal has pushed them aside.

Turmoil in Iraq would have a wider impact in a region where a crisis in neighbouring Syria is taking on a more sectarian tone and Shi'ite Iran, Turkey and Sunni Arab Gulf states are jockeying for influence.
U.S. officials, diplomats and Iraqi politicians have been in talks to end the dispute that threatens to push Iraq back into the kind of sectarian violence that took the OPEC member to the edge of civil war a few years ago.

Biden played a diplomatic role during the U.S. military's departure from Iraq, travelling to the country and discussing signs of rising sectarian tension with Iraqi leaders.