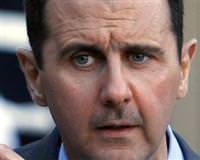 Thirteen people were killed as Syrian armoured forces battled opponents of President Bashar al-Assad in Homs on Monday, residents said, ahead of a planned visit by Arab League monitors to verify whether he is ending a violent crackdown on unrest.

Thirteen people were killed as Syrian armoured forces battled opponents of President Bashar al-Assad in Homs on Monday, residents said, ahead of a planned visit by Arab League monitors to verify whether he is ending a violent crackdown on unrest.
A day before observers were to have their first look at the city at the heart of a nine-month-old uprising, there was no sign of Assad implementing a plan agreed with the League to halt military repression of protests and start talks with opponents.

With an armed insurgency increasingly eclipsing civilian protests, many fear Syria is drifting towards sectarian war pitting majority Sunni Muslims against Assad's minority Alawite sect, an offshoot of Shi'ite Islam, especially after a double suicide bombing in Damascus on Thursday that killed 44 people.

"The Baba Amr (district) (of Homs) is being exposed to fierce shelling from heavy machinegun fire, armoured vehicles and mortars," the British-based Syrian Observatory for Human Right said in a statement.

"The violence is definitely two-sided," said a Homs resident who named himself only as Mohammed to protect his safety. "I've been seeing ambulances filled with wounded soldiers passing by my window in the past days. They're getting shot somehow."

Parts of Homs are defended by the Free Syrian Army, made up of defectors from the regular armed forces, who say they have tried to establish no-go areas to protect civilians.

The Observatory documented names of those reported killed in Monday's clashes that began with raids and arrests by pro-Assad forces, which were also reported in Syria's second city of Aleppo, which had been spared from the upheaval until recently.

The initial 50 of 150 Arab League monitors were due to arrive in Syria on Monday, and some will go to Homs on Tuesday, a source at the organisation's headquarters Cairo told Reuters. Their job will be to assess whether Assad is going to withdraw tanks and troops from Syria's third largest city as promised.

"The Arab monitoring team will visit Homs as it is the most turbulent place," the source said.

Syrian state television has regularly shown some areas of the city of one million looking peaceful. But activist video posted on the internet shows other parts looking like a war zone of empty streets, bodies and shattered house fronts.

Syria has barred most foreign journalists since the revolt began, making it hard to verify reports of events on the ground.

The United Nations says at least 5,000 Syrians have been killed the revolt, inspired by other Arab uprisings this year that have toppled three dictators, broke out in March - and an estimated one-third of deaths have occurred in and around Homs.

Assad says his government is facing an insurgency by gangs of terrorists. Arab League states persuaded him, after six weeks of threats and cajoling, to let 150 observers in to witness what is really happening on the ground.

The first group of about 50 monitors, led by Sudanese General Mustafa Dabi, will be divided into five 10-man teams going to five locations.

"We're waiting. Let's see," said Homs resident Mohammed. "We hope they work the way they should. We hope they will be neutral ... If they are neutral they will be condemning everyone but most especially the (Syrian) authorities because they are the ones who should be responsible for protecting people."

He said some Homs districts were running out of food.

"My friends in Baba Amr, who have nothing to do with the troubles, say they don't have bread. They are under siege."

Arab League mission chief Dabi arrived in Damascus on Friday while the capital was reeling from twin suicide bombings last week that marked an ominous escalation of the violence.

Assad's opponents say they suspect his government carried out the Damascus bombings itself to prove to the world that Syria is facing indiscriminate violence by armed Islamists and to intimidate the work of the Arab League monitors.

Assad's opponents have voiced scepticism about the Arab mission to oversee a peace plan they say Assad will not honour, given the continuing fierce repression against demonstrators.

The Syrian authorities blame the violence on foreign-backed armed Islamists who they say have killed 2,000 members of the security forces since the unrest flared in March.

ONE WEEK ENOUGH TO ASSESS COMPLIANCE

Dabi said he had met Arab League chief Nabil Elaraby in Cairo before departing for Damascus, laying down a "road map" for the mission's work, which he promised would be transparent.

In remarks carried on the Egyptian state news agency, Dabi said the mission would meet different groups in Syria, including the armed forces and members of the opposition.

It was not known if Syrian authorities would give the monitors enough freedom of movement to do their job properly.

After six weeks of stalling, Syria signed a protocol this month to admit the monitors under the plan calling for an end to violence, the withdrawal of troops from the streets, the release of prisoners and a reform-minded dialogue with the opposition.

Elaraby said it would take only a week to find out if the authorities are respecting the terms of its peace plan.

Burhan Ghalioun, head of the opposition Syrian National Council, said the League, which has imposed sanctions and suspended Syria's membership, should step up pressure on Assad's by asking the U.N. Security Council to adopt the Arab initiative.

"We want this regime to leave so that we can live in peace. The world should not stand watching over the bodies of men, women and children," the exiled opposition leader said in a Christmas video address to Syrians.

Assad, 46, succeeded his father in 2000 to carry on a dynasty that has ruled for 41 years. He has responded to popular calls to step down with a mixture of force and promises of reform, announcing an end to a state of emergency, giving citizenship to tens of thousands of Syrian Kurds, and promising a parliamentary election in February.