Chants for Erdoğan in Homs 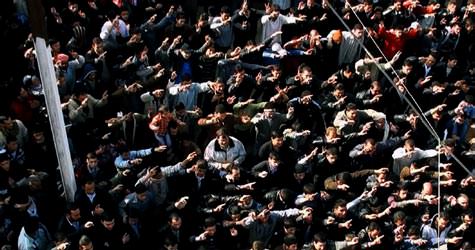 Tens of thousands of Syrians in Homs rallied on Tuesday against President Bashar al-Assad, waving Turkish flags and chanting "Erdoğan", emboldened by Arab peace monitors' first tour of the flashpoint city, after the army withdrew some tanks following days of unrest.

Some 70,000 protesters marched towards the city centre waving Turkish flags and chanting "Great Erdoğan". According to activists, security forces fired at them and lobbed teargas.

The observers want to determine if Assad is keeping his promise to implement a peace plan to end his uncompromising military crackdown on nine months of popular revolt that has generated an armed uprising, edging Syria towards civil war.

The Syrian Observatory for Human Rights said security forces killed 15 people across the country on Tuesday, six of them in Homs. An activist network said 34 had been killed on Monday.

Some protesters shouted "we want international protection" in a video posted on YouTube apparently showing a street encounter with the Arab League observers, in which some residents argued and pleaded with them to venture further into the Baba Amr quarter, where clashes have been especially fierce.

There was the sound of gunfire after a resident yelled at one monitor to repeat what he had just told his headquarters.

"You were telling the head of the mission that you cannot cross to the second street because of the gunfire. Why don't you say it to us?" the man shouted, grabbing the unidentified monitor by his jacket.

Gunshots crackled nearby as two monitors and two men wearing orange vests stood amid a crowd of residents, one begging the team to "come and see; they are slaughtering us, I swear."

Damascus has barred most foreign journalists from the country, making it hard to check events on the ground.
The head of mission said the first visit was "very good."

"I am returning to Damascus for meetings and I will return tomorrow to Homs," Sudanese General Mustafa Dabi said. "The team is staying in Homs. Today was very good and all sides were responsive."

Activist reports just before the monitors arrived said up to a dozen tanks were seen leaving Baba Amr but others were being hidden to fashion a false impression of relative normality in the city while observers were around.

"My house is on the eastern entrance of Baba Amr. I saw at least six tanks leave the neighborhood at around 8 in the morning," Mohamed Saleh told Reuters by telephone. "I do not know if more remain in the area."

Al Jazeera television showed an estimated 20,000 Syrians in a square in Khalidiya, one of four districts where there has been bloodshed as rebels fight security forces using tanks.

They were whistling and shouting and waving flags, playing music over loudspeakers and clapping. Women were advised to leave because of the risk of bloodshed. But a speaker urged the men to "come down, brothers."

The protesters shouted "We have no one but God" and "Down with the regime." An activist named Tamir told Reuters they planned to hold a sit-in in the square.

ASSAD ISOLATED
The autocratic Assad is internationally isolated. Western powers and his neighbors Turkey and Jordan have called on him to step down, which would end a 41-year-old family dynasty.

He says he is fighting Islamist terrorism steered from abroad and has defied calls to make way for a reformist succession as has transpired in Egypt, Libya and Tunisia after popular uprisings toppled dictators this year.

Armed insurgency is eclipsing civilian protest in Syria. Many fear a slide to sectarian war between the Sunni Muslim majority, the driving force of the protest movement, and minorities that have mostly stayed loyal to the government, particularly the Alawite sect to which Assad belongs.

Analysts say the Arab League is anxious to avoid civil war. Western powers have shown no desire to intervene militarily in a volatile region of Middle East conflict. The U.N. Security Council is split, with Russia - a major arms supplier to Assad - and China opposed to any hint of military intervention.

Assad's opponents appear divided on aims and tactics. He retains strong support in important areas - including Damascus and the second city Aleppo - of the country, and maintains a critical anti-Israel alliance with Iran.

Homs protesters appeared to take heart from the monitors' sudden presence. They want to impress on the Arab League mission that it must not let its teams be hoodwinked by the state and be shown places where life looks relatively normal.

As the monitors arrived, tanks were seen leaving the Baba Amr district which activists say was pounded for the past four days. Hundreds have been killed in Homs in the revolt - among the 5,000 the United Nations says have died as a result of violence nationwide since protests began in March.

In Baba Amr on Monday, activist video showed bodies crushed and buildings smashed as if by high explosive weapons. The images were impossible to verify.
"We do not want to jump to conclusions and say that this delegation is not objective or did not look for the truth," said Moulhem Droubi, top ranking Muslim Brotherhood member on the Syrian National Council, the opposition umbrella group in exile.

"It is not fair yet to judge. Let's wait and see what it will do," he told Reuters by phone from somewhere outside Syria.

"I expect it will be able to write a report with many facts because the facts are so clear. If they go to Baba Amr they will see that there is destruction."

Syria stalled the Arab League for months before accepting the monitoring mission, the first significant international intervention on the ground since the start of the popular revolt inspired by Arab pro-democracy uprisings this year.

The Arab delegation started with 50 monitors who arrived on Monday. About 100 more are to follow soon.

On the border with Turkey, Syrian forces killed "several" men from an "armed terrorist group" trying to cross into Syria, the state news agency SANA said on Tuesday.

The northern border has become the route of choice for infiltration by army defectors fighting to topple Assad since Turkey's government, once a close ally, parted ways with him over the bloody repression of protesters.

SANA also reported that "an armed terrorist group targeted and sabotaged a gas pipeline near Rastan in Homs province" on Tuesday. The pipeline has been attacked several times in recent months and returned to operation each time.