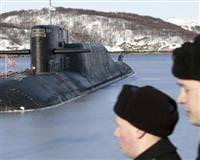 Russia said on Friday it had doused a raging blaze aboard a nuclear submarine after nearly a full day and night, by partially submerging the vessel after battling the flames with water from helicopters and tug boats.

There was no radiation leak and crew inside the submarine were monitoring the stricken vessel's nuclear reactors which had been shut down, Russian officials said.

At least nine people were injured fighting the flames which witnesses quoted by local media said rose 10 meters (30 feet) above the Yekaterinburg submarine at the navy ship yard in the Murmansk region of northern Russia.

"The fire on the submarine has been totally extinguished," Emergencies Minister Sergei Shoigu told officials leading the firefighting effort, more than twenty hours after the blaze began Thursday afternoon at 1220 GMT.

His remarks were reported by Interfax news agency.

Emergency officials decided to partially submerge the 18,200-tonne Yekaterinburg submarine at the Roslyakovo dock, one of the main dockyards of Russia's Northern Fleet, 1,500 km (900 miles) north of Moscow, after hours of fighting the fire.

Russia's nuclear submarine fleet, once the pride of the Soviet Union's mighty armed forces, has been involved in a host of disasters including the sinking of the Kursk nuclear submarine in 2000 with the loss of all 118 people on board.

Official statements were vague, but the blaze is believed to have started when wooden scaffolding caught fire during welding repairs to the 167-meter (550 feet) Yekaterinburg submarine, which had been hoisted into a dry dock.

President Dmitry Medvedev ordered an investigation into the incident, the Kremlin said.

The submarine, which launched an intercontinental ballistic missile from the Barents Sea at a firing range as recently as July, can carry 16 ballistic missiles, each with four warheads, and a crew of 140.

A Defense Ministry spokesman said all its weapons had been removed before repairs started and its nuclear reactors were shut down.

"Radiation indicators are within normal levels. There is no threat to the local population," the Emergencies Ministry said in a statement. Russian submarines' reactors are built to withstand enormous shocks and high temperatures.

Part of the crew was onboard the submarine to check carbon dioxide levels, the temperature and to ensure the safety of the nuclear reactors.

"Part of the crew remains on board and is carrying out regular monitoring every 30 minutes of the situation in the nuclear submarine and around it," Russia's foreign ministry said in a statement.

The Yekaterinburg is a Delta IV class submarine. Russia's Northern Fleet was established under the Soviet Union to watch over European waters and was armed during the Cold War against threats from NATO.

The navy was criticized by Russia's political leaders following the Kursk disaster for failing to give accurate information about the true nature of the disaster.