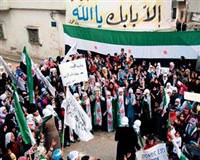 Opposition activists urged people to take to the streets on Friday, the main day of protest in the revolts that have swept the Arab world, to convince Arab League peace monitors to pay attention to their plight.

The Arab League mission to verify whether President Bashar al-Assad is keeping to a pledge to end the crackdown on a nine-month pro-democracy uprising has so far failed to bring a reduction in violence.

Government security forces shot dead 25 people on Thursday, the Syrian Observatory for Human Rights said. They opened fire on protests in cities around the country, also wounding about 100 people.

Six were killed in Hama, a centre of unrest, and four more were killed when security forces fired at a street rally in Douma, a Damascus suburb, the British-based Observatory said.

Activists contacted by telephone said they had little hope the Arab League monitors would protect them but they still aimed to bring people out into the streets after Friday prayers.

"We know that just because they are here, it doesn't mean the bloodshed will stop. But at least they will see it," said one activist in Hama, who was unwilling to give his full name.

"We have plans for big protests tomorrow," said another activist in the town of Idlib, although he declined to go into details.

Most foreign journalists are banned from the country, making it impossible to verify the reports on the ground.

The United Nations says more than 5,000 people have been killed in the nine months of protests against Assad and the Arab League monitors are part of efforts to ease the bloodshed.

Some 150 monitors in total are expected to enter Syria by the end of the week.

But anti-Assad activists have said the monitoring mission is too small and easily restricted by state security escorts that many protesters are afraid to approach.

Questions have also been raised about the chief of mission, a Sudanese general whose government has defied an international war crimes tribunal over bloodshed in Darfur.

A Syrian Foreign Ministry spokesman said Arab monitors were getting "all the facilities they need" to assess the crisis.

Monitors aim to check conditions in the turbulent cities of Deraa, Hama and Idlib, which lie along a 450-km (280-mile) arc from the south to the north of Syria.

In Hama, activists said on Thursday protesters went out into the streets to await the Arab League delegation as security forces deployed in strength in the area.

"People really hope to reach the monitors. We do not have much access to the team. The people stopped believing anything or anyone now. Only God can help us now," said Abu Hisham.

Hama has a resonance for Syrians opposed to Assad. His late father ordered a massacre of up to 30,000 people there in 1982 to put down an Islamist insurrection.

Syria says of the current protests that it is fighting Islamist militants steered from abroad who have killed over 2,000 of his security force.