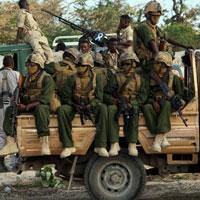 Ethiopian troops captured a rebel-held town in central Somalia on Saturday, Addis Ababa and residents said, in a new front against the al Qaeda-linked militants who are seen as a threat to the region's stability.

The al Shabaab rebels said on Saturday they had repelled three Ethiopian assaults north of the town and then carried out a "planned withdrawal" from the settlement.

Both Ethiopia and Kenya have sent troops into Somalia to fight Islamist al Shabaab militants, following a wave of cross-border attacks and kidnappings Nairobi blamed on the rebels.

The reports suggested the militants were now facing opposition on three fronts.

Al Shabaab is fighting Kenyan troops in the south. African Union peacekeepers and Somali government soldiers have pushed the militants out of most of the capital Mogadishu. The Ethiopian assault marked a new push in central Somalia.

"We were woken up by the shells of Ethiopian troops early in the morning. They attacked al Shabaab on the outskirts of the town. We cannot leave our houses. We can see Ethiopian troops from the cracks of our windows," he said.

"Enemy troops were routed during the operation and have retreated. We only had minimal losses," Bereket said.

Baladwayne is a commercial and farming town that lies near a river in central Somalia, about 45 km away (28 miles) from the Ethiopian border and 335 km north of Mogadishu.

It is also the capital of the Hiiran region and was under the control of al Shabaab, which is fighting Somalia's Western-backed government. Residents fear the militants could retake the town if Ethiopian troops leave.

Somalia has been mired in anarchy since warlords toppled military dictator Mohamed Siad Barre in 1991.

On its Twitter account, al Shabaab quoted Abu Musab as saying the militants had declared a "planned withdrawal" from the town because of Ethiopia's "indiscriminate" shelling. The claim could not be independently verified.

Local elder Hassan Abdi said many residents had fled the town as the warring parties fought on the outskirts.

"We do not have details about casualties. No fighting took place in the town itself. The town is calm," he said.

The Somali government said on Saturday its forces had recaptured some al-Shabaab territory in Hiiran and other regions.

Ethiopian soldiers previously went into Somalia in 2006, and left in early 2009 after pushing the Islamist Islamic Courts Union out of the capital Mogadishu.

At the time, most Somalis opposed the intervention and analysts said it may have encouraged people to join the militants. This time, locals say public opinion has largely turned against the militants.

Kenya has witnessed a spate of low-level attacks against its security forces near the border with Somalia since the start of the military campaign.

Kenya said it would host an anti-piracy conference in February as cooperation grows between al Shabaab and pirate gangs who have increased attacks off the Horn of Africa coast.