Three messages to Maliki from Ankara 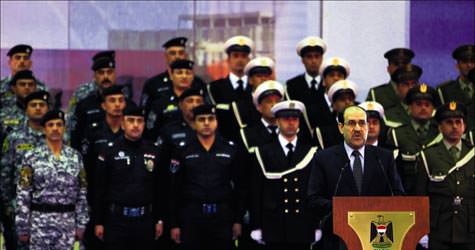 Responding to the threat of Iraq’s division, Turkey has warned the United States to not “indulge Maliki”, and has told Maliki to, “Keep the promise you made, protect Iraq’s multicultural structure and do not interfere in Syria’s internal affairs.”

As the political crisis intensifies for our neighbors, namely, the developments which led to Iraq's Vice President Tariq Hashimi's seeking refuge in Northern Iraq, Prime Minister Erdoğan has sent a message to Iraq to "be calm".
After Foreign Affairs Minister Davutoğlu relayed Prime Minister Tayyip Erdoğan's views to both Tariq Hashimi and Massoud Barzani via telephone last week, it has now been learned that a message has also been delivered through special means to Iraq's Prime Minister Nuri al-Maliki.

'IRAQ'S STRUCTURE MUST BE PRESERVED'
High level sources have relayed the three-point message Ankara has delivered to Maliki as follows:
"We are following the developments in Iraq with apprehension and caution. Turkey believes that normalization is needed in Iraq as soon as possible. As your neighbors, we are expecting you to fulfill the pledge and keep the promises made both prior to and following the election. It is crucial for no single sect to insist on being dominant in Iraq because the U.S. presence has withdrawn, it is crucial for the country's future that Iraq's multiculturalism, ethnicity and democratic structure is preserved."
According to the same sources, the Syria issue was also touched upon in the messages delivered. In Ankara's message to Maliki, it was also stated that "the Baghdad administration should not correlate the situation in Iraq with that of Syria. We are of the opinion that Iraq needs to not intervene in Syria's internal affairs, which we consider to be to both Iraq and Turkey's mutual interests."
Meanwhile, Ankara also feels that in regards to Hashimi's trial process, the location where it transpires is of importance. While Maliki wants the trial to be held in Baghdad, Ankara supports Hashimi's preference to face trial in Northern Iraq. The issue was also discussed during the telephone conversations Ahmet Davutoğlu held with both Tariq Hashimi and Massoud Barzani last week.
While details of the discussion are beginning to become clarified, the notion that Ankara supports the trial taking place in Kirkuk was relayed. However, due to this viewpoint's potentiality of being considered "interference in Iraq's internal affairs", it was not shared with Maliki. Meanwhile, the message that "Tariq Hashimi's security is very important to us" was relayed to Barzani and supposedly he responded to Foreign Affairs Minister Davutoğlu by stating that no matter how much pressure Baghdad exerts, they would not be returning Hashimi.
A WARNING TO THE USA TO NOT 'INDULGE MALIKI'
In order to ensure the Sunni-Shiite conflict does not escalate and the nation become divided, Turkey has told the United States to not "Indulge Maliki any further".
Turkey has also made contact with Kurdish-Sunni and Shiite groups. The objective being for a national conference to gather in Iraq, in line with Barzani's call for such, and to prevent for the nation from further division.
When Foreign Affairs Minister Davutoğlu spoke with U.S. Secretary of State Clinton during a phone call last week, he stated, "Iraq could have been a model for Arab nations, and still could be, however should the ethnic and sectarian strife persist, then division is inevitable. The protection of Sunni leader Hashimi and the continuation of his office are required for Iraq's security."