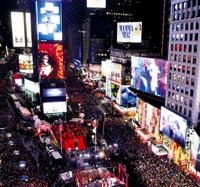 Throngs of revelers in and around New York's Times Square gave a boisterous welcome to 2012 on Sunday amid tight security, sending off a year marked by the grim 10th anniversary of the September 11 attacks on the city.

Fireworks filled the sky at midnight and confetti dropped on celebrants in the famed Midtown Manhattan square after a large lighted crystal ball descended for the last minute of the old year -- a tradition started in 1907.

The light-studded ball was raised six hours before the drop, and police who closed off streets around Times Square also prohibited celebrants from bringing alcohol, backpacks, large bags or packages into the area.

The raucous celebration, which had been expected to draw a million revelers, included a line-up of televised performances by pop stars Lady Gaga and Justin Bieber.

Several hundred anti-Wall Street protesters also streamed into Manhattan's Zuccotti Park, video footage showed, returning to the birthplace of the national Occupy movement against economic inequality that has seen its momentum falter as cities closed tent camps around the country.

At one minute before midnight, New York Mayor Michael Bloomberg and Lady Gaga pressed the button that signals the start of a 60-second descent of the Waterford crystal ball.

"I thought I was going to freeze, but it's not that bad at all," said a young woman who identified herself as Alexis and came from Virginia with a friend to see Bieber and "because it's fun, and it's cool, and I've never been to New York."

Police spokesman Paul Browne said bomb squad units were conducting sweeps of hotels, theaters, construction sites and parking garages, but were not aware of any specific security threats to the city.

"New York City is always at the top of the terrorists' target list and we treat most large gatherings, especially high profile, iconic ones like New Year's Eve, as potential targets," Browne said in an email. "However, there are no known threats on the city coinciding with New Year's Eve."

A Pakistani-American, Faisal Shahzad, pleaded guilty in 2010 to rigging up a crude car bomb packed with explosives and parked near Times Square. The bomb failed to go off and Shahzad later said he had been trained by Pakistani Taliban fighters.

Radiation-detection boats were deployed in the city's waterways on Saturday, where 33 dinner cruises were scheduled to take place, and officers patrolled the city's streets and transit system, Browne said.

The New Year's Eve celebrations also included a salute to the memory of those who died in the September 11, 2001, attacks on the World Trade Center. Somber ceremonies marked the 10th anniversary of those attacks in September.

That came after U.S. forces killed Osama Bin Laden, the al Qaeda leader behind the attacks, in a May raid in Pakistan.