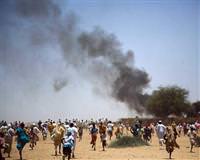 Up to 50,000 people have fled violence in a remote border area of South Sudan, the United Nations said on Monday, after days of clashes between two tribes.

South Sudan became independent in July last year under a 2005 peace deal with Khartoum to end decades of civil war. But the new nation is struggling to build state institutions and stop rebel and tribal bloodshed that has killed thousands.

On Monday, some 6,000 armed members of the Lou Nuer tribe attacked the remote town of Pibor in Jonglei state bordering north Sudan after days of clashes with the rival Murle tribe, U.N. sources said.

Lise Grande, U.N. humanitarian coordinator for South Sudan, said tens of thousands of civilians had fled Pibor and nearby towns to escape the violence.

"We are worried about their conditions. They are without water, shelter and food. They are hiding in the bush. I think it is between 20,000 and 50,000. This is an estimate only," she told Reuters. She had no information about casualties.

U.N. sources said around 3,000 soldiers and 800 policeman were on their way to Pibor. Cattle raids, they said, had sparked the latest violence.

Doctor Without Borders (MSF) suspended operations in the area after two of its clinics were damaged by fighting, said MSF worker Jean-Marc Jacobs.

"We evacuated our international staff," he said. "We have been unable to make contact with most of our local staff. We advised them to stay safe and they are hiding in the bush."